Better than the pest 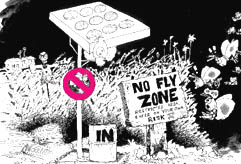 the excessive use of chemical pesticides has led to the emergence of several pesticide-resistant varieties. For long, Andhra Pradesh -- a major agricultural centre of south India -- has been witnessing several cases of uncontrollable pest attacks and consequent crop failure. To meet such challenges, the Centre for World Solidarity (cws), Hyderabad in collaboration with some other organisations, has started promoting the Non-pesticidal Management of Pests (npm).

The method envisages attracting moths of Red-headed Hairy Caterpillar (rhc) to light. It is noticed that parent moths emerge from soil following heavy showers. If lights are kept on for nearly four hours at night (between 8 pm to 12 pm), most of the moths are attracted to these and fall into a tub containing soap or kerosene water placed underneath, and die before laying their eggs.

After several trials, the cws had settled on the simplest and cheapest technological options -- hanging a bulb over a bucket of water. This work, carried out successfully by the cws , has led the government to include light traps as part of its Pest Management Programme. K R Kishore, agriculture commissioner of Andhra Pradesh, says that the cws programme has cut down pest damage by rhc to four per cent, while untreated areas suffer over 50 per cent damage.

Nevertheless, farmers face problems when the power grid fails during heavy rains resulting in power cuts. Due to this, on several occasions farmers fail to trap moths in time before they have laid their eggs. Sometimes, it even becomes difficult and dangerous to drag a cable over several metres from a plug point to a field that needs to be protected.

Now, people have started using renewable energy for this purpose. Last year, the cws experimented with solar lanterns instead of traditional electric lights, in an area of 0.81 ha. The lanterns were foudn to be as successful as conventional lights. As a result of this, the cws approached the India repso (Renewable Energy Project Support Office) for financial support to perform a similar trial over an area of nearly 40 ha. India repso is a part of the us -based Winrock International. The decision was taken to justify the significant impact of the technique on crops. The ecological technologies -- that combine traditional wisdom with modern science -- are now being expanded to manage a wide range of pests.

The India repso recently signed an agreement to provide financial support for a solar-powered-lantern project. According to the agreement, the India repso provided us $15,000 as a grant to the cws for purchase of 75 lanterns light traps for a trial during Kharif season last year. The lanterns have been manufactured by Hyderbad's Renewable Energy Systems (res). The grant also includes the cws 's expenses for managing and monitoring the field trials, over an area of four ha in the village Mandonigudam in Warangal district, Andhra Pradesh in collaboration with Centre for Rural Operation Programs Society (crops), an ngo based at Jangaon, Andhra Pradesh.