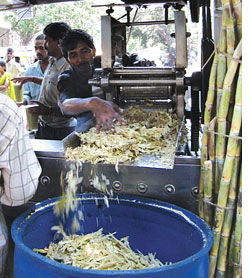 A fungus grown on bagasse can save bamboo from another fungus

EVEN as several fungal species act as significant plant pathogens, many have been found beneficial in controlling plant diseases. Take for example the fungus Trichoderma. This fungus is a common biological control agent and is useful in controlling diseases, particularly the white rot disease in bamboo.

However, growing these fungi in large quantities entails use of expensive chemicals. Forever on the lookout for cheaper alternatives, N S K Harsh of Forest Research Institute, Dehradun, realized over a glass of sugarcane juice, that bagasse could be one.

Bagasse is what remains after cane stalks are crushed to extract juice. It is rich in sugars and supports rapid fungal growth. Using bagasse as the substrate, Harsh cultured two species of the fungus Trichoderma: T pseudokoningii and T harzianum.

The fungi causing the white rot disease, infest depots where harvested bamboo is stored. This leads to 25 per cent loss of stored bamboo every year. When bagasse with Trichoderma growing on it, is applied to bamboo, these decay fungi are killed. The decay fungi are usually controlled by spraying the bamboo with fungicides.

The chemicals stain the wood, rendering the bamboo unsuitable for anything other than the pulp and paper industry. There, too, it has to be treated further to remove the stains caused by the fungicides. But by treating the bamboo with bagasse- Trichoderma, the use of chemicals can be avoided completely, Harsh found.

Harsh grew Trichoderma on dried and powdered bagasse. Within 15 days the fungus colonized the bagasse. Before spraying it on bamboo, he mixed it with water. For every gram of bagasse- Trichoderma, a litre of water was added. "The mix can be sprayed just once, unlike fungicides which have to be repeatedly applied," said Harsh. Since Trichoderma grows naturally on bamboo, once the mix is sprayed, it grows and continues to keep the decay fungi at bay, he added.

Harsh presented this paper at the International Conference on Improvement of Bamboo Productivity and Marketing for Sustainable Livelihood held in New Delhi in April 2008. The conference was organized by the National Bamboo Mission.

Though this research has made biocontrol of fungal attacks possible, there are not many takers of the product. "We have signed a memorandum of understanding with a government paper mill in Assam but it has not moved further. Not many people are interested in such research, though it is environment friendly and an easier way of controlling fungal attacks on bamboo," said Harsh. Harsh found the cost of producing bagasse- Trichoderma powder on a small scale to be Rs 75 per kg. He said that it would be cheaper on a commercial scale. Commercially available Trichoderma grown on talc (hydrated magnesium silicate) costs Rs 180 per kg and can treat root rot diseases.

H B Singh, a professor at Banaras Hindu University, has 20 years experience in developing Trichoderma -based biocontrol products. He foresees a flaw. "The fungus would use bamboo's cellulose as a source of food. Trichoderma is one of the best degraders of cellulose and this would weaken the bamboo," he said.