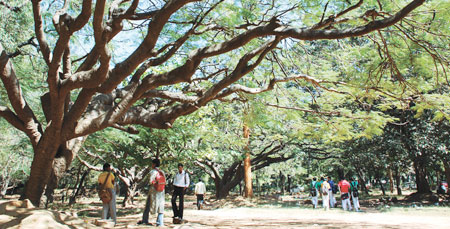 PLANTS soak more atmospheric pollutants than thought. A study by US scientists shows that apart from carbon dioxide, plants rid the air of volatile organic compounds, or VOCs, the most abundant class of carbon-based chemicals in the atmosphere.

Automobile exhaust, coal burning and industry are some of the major sources of VOCs that causes respiratory diseases. “In the atmosphere they combine with nitrogen oxides to form organic nitrates, a particulate matter responsible for the haze during air pollution,” said Thomas Karl, scientist at the National Centre for Atmospheric Research in USA, who led the study.

VOCs also combine with oxygen to form tiny airborne particles called oxygenated VOCs, which insulate the atmosphere and lead to warming. Scientists had long suspected that plants absorb small amounts of VOCs from the atmosphere because they release the compounds while decaying.

To estimate how efficient this absorption is, Karl and his team measured the level of VOCs in the atmosphere at six different places across the North and South Americas representing different ecosystems. Three of them represented tropical rainforests and the others were temperate deciduous forest, mixed temperate forest and semiarid shrub land.

With the help of computer modelling and laboratory experiments, the scientists analysed the field data and found, on an average, ecosystems across the globe absorb 36 per cent more VOCs than thought.

The process occurs at an optimum rate in thick tropical forests and is the lowest in semiarid shrub , the scientists noted in the October 21 issue of Science Express. The finding provides a platform for better climate models, Karl said.

Anjali Srivastava, a researcher at the National Environmental Engineering Research Institute, calls the work significant and pioneering. Srivastava works on identifying plants that can help reduce the level of VOCs in indoor environment, for example from deodorants and paints. “Initial findings show basil and money plant can significantly reduce VOCs indoors,” she said.