Racial and gender imbalances in US news broadcast sources 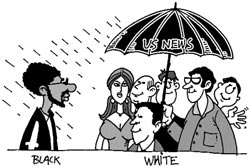 US news takes more opinions from the white and has dramatic racial imbalances in sourcing. In fact, 92 per cent of all US 'sources' interviewed in 2001 on ABC World News Tonight, CBS Evening News and NBC Nightly News were white and only seven per cent black, says a study conducted for the US Fairness & Accuracy In Reporting (FAIR) organisation by media analysis firm Media Tenor. Other groups were even more strikingly underrepresented, with 0.6 per cent of all sources being Latino, 0.6 percent Arab-American and 0.2 percent Asian-American. Besides this, around 85 per cent were male and 75 per cent Republican. Over 25 per cent of sources were politicians: President Bush accounted for nine per cent of all sources.

The study also reveals that the 'big three' nightly TV news programmes in the US "rely heavily on society's most powerful groups when they report the news of the day", with a "strong tendency of the networks to turn to the party in power for information". Interestingly, the document also points out that 62 per cent of all partisan sources were administration officials.

Women made up only 15 per cent of all sources (14 per cent on ABC and CBS, and 18 per cent on NBC), and were rarely featured as experts. Over half of the women who appeared on network news in 2001 were presented as 'ordinary Americans' (rather than experts of some kind), in contrast to 14 per cent of male sources.

The study shows that more than one in four sources were politicians as compared to a mere three per cent for all non-governmental advocacy groups. Big business, too, was overrepresented. In a year in which the country lost 2.4 million jobs, corporate representatives appeared about 35 times more frequently than did union representatives. The findings show that US broadcast news functions are now turned more into a venue for the claims and opinions of the powerful than a free forum for public discussion and education.
Wildlife Wildlife Wildlife Birds Poaching Chilka Chilka Migratory Species Fisherfolk Dredging Lakes Ecotourism Ecotourism Benefit Sharing Orissa Coexistence Strategies Features Race Relations Women Global Global Media
Donate Now