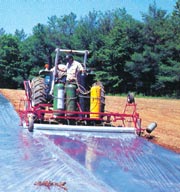 In another brazen display of contempt for international treaties, the us administration is seeking exemption for certain uses of methyl bromide -- an ozone depleting substance (ods) to be phased out by industrialised countries under the 1987 Montreal Protocol. The us is the largest consumer of methyl bromide, widely used as a fumigant.

It wants to be allowed to continue using the ods in food processing, commodity storage, transplant trays used in certain greenhouse production systems, and for cultivation of forest seedlings, orchard seedlings, turf and sod, and some vegetables.

"This attack on the ozone layer will put more people at risk of cancer. It would also punish responsible growers who have...adopted safer alternatives," lamented David Doniger, policy director, Climate Center of the Natural Resources Defense Council, a non-profit organisation of scientists. The administration has asked for exemptions totalling 39 per cent of the production level in 1991 (baseline year). The outer limit set by the protocol is 30 per cent. The us plea will be considered in a meeting in November 2003.