Big is out, small is in 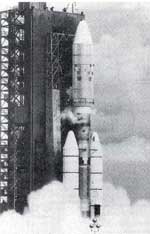 SO FAR, a great deal of US space exploration has been the hegemony of massive spacecraft such as those used in the Apollo moon exploration programme, the Voyager flybys of the outer planets and the latest Galileo and Cassini missions. However, a severe resource crunch is compelling the National Aeronautics and Space Administration (NASA) to turn to smaller, faster and cheaper space probes.

Besides budgetary cuts, NASA has been encouraged by the defence department's Clementine mission, in which a diminutive space sleuth blasted off last January to circle the moon and then head for the asteroid (Down to Earth, March 15, 1994). Although the asteroid mission was abandoned after a computer malfunction drained out its fuel, several of the spacecraft's features, especially its lightweight, high-tech sensors, raised the possibility of ambitious science at modest cost (Science, Vol 264, No 5163).

NASA's new strategy for planetary exploration is epitomised in its "Discovery" programme, which will launch a new, low-cost mission every 12-18 months to explore asteroids, planets and even the sun. These expeditions would cost just $100-130 million a year, compared to $654 million now. Researchers have deluged NASA with ideas and at least 2 -- the Near Earth Asteroid Rendezvous (NEAR) mission and Pathfinder, a project to land a vehicle on Mars -- have been approved by Congress and are in the design and development stage. The Applied Physics Laboratory (APL) in Maryland is working on NEAR and the Pasadena-based Jet Propulsion Laboratory is developing the Pathfinder project.

NASA is also considering 14 other proposals, including 2 by JPL: the Venus Environmental Satellite (VESAT) to monitor the planet's atmosphere by analysing its near-infrared glow and the Hermes Global Orbiter (HGO) to obtain for the first time a complete picture of Mercury. Although there have been 3 Mercury flybys, they all viewed the same side of the planet.

The National Optical Astronomy Observatories in Tucson hopes to send 4 Small Missions to Asteroids/Comets (SMACS) -- each spacecraft weighing just 100 kg and costing only $10 million. Another project APL has proposed is the Near Earth Asteroid Returned Samples (NEARS). A key feature of NEARS is a "gun" that will fire 6 sample tubes into the surface of an asteroid as the craft briefly touches down on it. The tubes will scoop out rock samples and return them in a special capsule to a parachute landing on Earth.


Space exploration has always been expensive. In the '60s and early '70s, each mission cost about $600 million, including construction, launch and operation. Since then, costs have skyrocketed. The two Voyager missions launched in 1977 cost $2.2 billion. Likewise, the Jupiter-bound Galileo spacecraft will cost about $3.1 billion -- mainly due to delays caused by the Challenger space shuttle disaster -- and the 1997 Cassini mission to Saturn will probably total $2.5 billion.

Scientists say 2 prime reasons for the financial crisis in planetary science are the increasing size of crafts and the complexity of their design. Larger spacecraft inevitably cost more. A typical mission of the '60s, for instance, weighed around a quarter tonne; Galileo weighs a massive 3 tonnes.

After the Apollo missions, a squeezed NASA was forced to "pile everything on each remaining spacecraft". To accommodate more equipment on board, crafts not only grew bigger, but also more complex and more expensive. This eventually forced NASA to think small and downsize its multi-million dollar behemoths.

Stringent budgetary and time restraints have been placed on each Discovery mission -- design and development is to be completed in 3 years and at a cost of not more than $150 million. Moreover, Discovery spacecraft will be launched on smaller rockets.

But the Discovery programme is not without its detractors. Experts say probes heading far from the sun need a $100-million generator instead of cheap solar cells. This leaves very little under the cost limit.

They cite the failure of the Observer programme of the '70s, which shares several similarities with the Discovery programme -- a series of missions of low-to-intermediate cost, focused on a few narrow scientific objectives. Within NASA, too, there are several "big thinkers" who prefer to lay their bets on large planetary science missions such as Galileo, Cassini and the still unscheduled Pluto Fast Flyby.