There is striking new evidence that the lollier-pollier the expectant mom, the more the chance of the kid being born with severe abnormalities 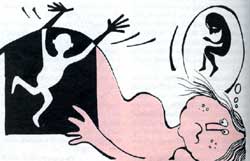 OBESE women are more than twice as likely to have babies with neural tube defects (NTO) such as spina bifida, as women of average weight, say American researchers. But the two teams of researchers from Boston and California also pointout that they do not yet understand why extra fat should mean added risk. The two groups have been studying infants born with NTO. This class of abnormalities includes babies born without a brain (anencephaly) and those with spina bifida, in which the spinal cord fails to develop fully (New Scientist, Vol150, No 2026).

Researchers know that poor nutrition and diabetes increase a woman's risk of having a baby with such a defect. Because obese people are more likely to eat badly and to suffer from diabetes, it was no surprise when some studies two years ago suggested that overweight mothers were also at higher risk of having malformed babies. The two groups decided to investigate further the link between a mother's weight and the health of her unborn child.

Gary Shaw and his team at California Birth Defects Monitoring Programme interviewed 538 women who had given birth to children with NTDS and compared them to an equal number with healthy babies. The team calculated each woman's body mass index by dividing their weights in kilo- grams by the square of their heights in meters. Those with an index over 29 were considered obese. These women were found to have twice the risk of delivering a child with NTDS.

But the real surprise was that women had a greater chance of having a malformed child regardless of whether they were diabetic or had poor nutrition, suggesting that obesity itself poses an extra risk for NTDS. Other factors known to playa role in NTDS, such as the mothers age, poor education and lack of vitamin's in the diet during pregnancy, could not explain the results.

Allen Mitchell and his colleagues at the Boston University School of Public Health reached similar conclusions after studying mothers of 604 babies with NTDS. But they also found that the risk increases the more obese mothers are. This team had shown earlier that women close to ideal weight could reduce their risk of having a baby with a NTD by over 40 per cent if they took a folic acid supplement.