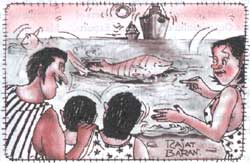 THE whale shark is one of the biggest, mysterious and until recently, least loved of all marine creatures. They are the world's largest fish, growing up to 12 metres long and weighing up to 11 tonne. But the size does not neccesarily mean that they are easily visible. Until 10 years ago, practically nothing was known about whale sharks. But now they have suddenly generated interest among biologists and tourists. The person responsible for much of this focus is Geoffery Taylor, an amateur marine biologist, who realised 10 years ago that a lot of whale sharks were congregating off Ningaloo Reef, near Exmouth every autumn. Taylor decided to carry out aerial surveys of the fish and also experimented by tagging them. The results showed that around 200 whale sharks visited the sites between March and June. Ningaloo has seen the development of a shark-watching industry. People are willing to pay US $140 a day for swimming with the sharks.