Lasted 100 million years and is still going on 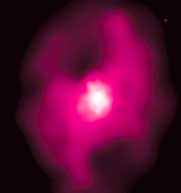 astronomers have found the most powerful explosion in the universe, which they say has been created by a supermassive black hole. The eruption was witnessed using the Chandra x -ray Observatory of the us National Aeronautics and Space Administration.

The huge eruption is reported from the hot, x -ray emitting gas of a galaxy cluster called ms 0735.6+7421. Two vast cavities extend from the supermassive black hole in the cluster's central galaxy. The eruption has lasted for 100 million years and is still going on. It has generated the energy equivalent to hundreds of millions of gamma-ray bursts, according to a study in the January 6 issue of Nature (Vol 433, No 7021).

The event was caused by gravitational energy released as enormous amounts of matter fell toward the black hole. Most of the matter was swallowed, but some was violently ejected before being captured by the black hole. "I was stunned to find that a mass of about 300 million Suns was swallowed," said Brian McNamara of Ohio University in Athens, the lead author of the study. "It's like a 300-pound (about 136 kilogramme) person eating 100 pounds (about 45 kg) of meat in one sitting," McNamara added.