Bihar’s earthquake toll due to poor condition of houses 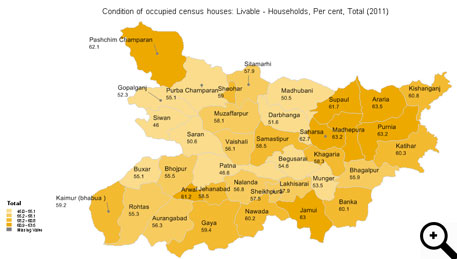 What made Bihar vulnerable to the Nepal earthquake and led to the reported deaths of 51 persons in the state? Proximity to Nepal and, therefore, the epicenter is certainly a primary reason. The other major reason is the condition of houses in the state. Almost all the deaths due to an earthquake are caused by the collapse of buildings. The condition of houses, therefore, is a key determinant of whether people survive or fall victim to an earthquake. Former National Disaster Management Authority (NDMA) Member, Vinod Menon, says that as many as 61 per cent of houses in rural India have been built without following engineering guidelines. “These are un-engineered houses which have been built using local knowledge, customs and material. They do not follow any safety regulations,” he said.

A set of indicators on the condition of houses captured by Census throws light on the subject.

Where condition of houses is good

This is a key indicator to determine the ability of a house to withstand an assault caused by an earthquake. Census data shows that Bihar is among the three states that have the lowest proportion of houses which can be categorised as ‘good’. While Odisha is at the lowest rank with only 29.5 per cent of its houses which Census 2011 found to be ‘good’, it is followed by Assam (32.8 per cent) and Bihar (36.1 per cent). On the other hand, states such as Puducherry (75 per cent) and Himachal Pradesh (72.4 per cent) are resilient against natural disasters of this type. 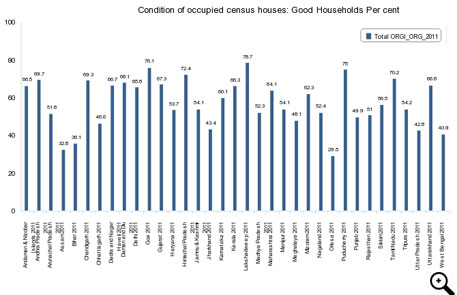 In Bihar, the districts which have reported deaths caused by the earthquake include Madhubani, Purba and Paschimi Champaran and Saran. All these districts have a very small proportion of houses in a good condition. While Patna leads the state at merely 46 per cent, Madhubani at 44.7 per cent, Paschim Champaran at 32.7 per cent, Purba Champaran at 39.3 per cent and Saran at 40.8 per cent do not compare well with many other districts of India such as Hamirpur district of Himachal Pradesh, which has 78 per cent houses categorised ‘good’. 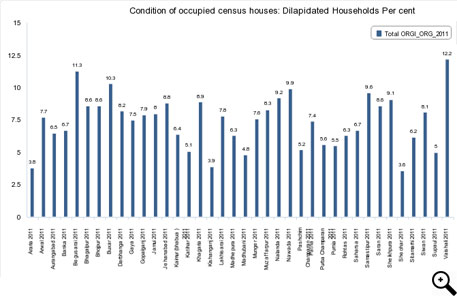 Where condition of houses is dilapidated

The triumvirate – Odisha, Assam and Bihar – lead India as states with the largest proportion of dilapidated houses. Odisha leads with 9.9 per cent of houses being dilapidated, followed closely by Assam (8.3 per cent) and Bihar (7.4 per cent). At the district level, similar trends are available with Saran reporting 8.6 per cent of houses as dilapidated, while Sitamarhi (6.2 per cent) and several other districts recording figures a little above or below the state average.

Where houses are livable

But Bihar’s 36.1 per cent ‘good’ houses and 7.4 ‘dilapidated’ houses do not quite constitute a major chunk of all houses in the state. The indicator ‘Condition of houses – livable’ offers an insight. The states with the largest proportion of houses in the ‘livable’ category, once again, are Odisha, Assam and Bihar, according to Census 2011 data. Odisha leads with 62.1 per cent houses as ‘livable’, followed by Bihar (55.6 per cent) and Assam (55.4 per cent). On the other hand, a relatively prosperous state such as Kerala (38.4 per cent) has less proportion of houses in the livable category. The ‘livable’ category is somewhere between ‘dilapidated’ and ‘good’. A ‘livable’ house may not be dilapidated but is does not assure the safety and strength a ‘good’ house does.

Menon says the Disaster Management Act has made it mandatory for house owners to comply with safety standards, but it may be a long time before compliance follows.

Anupam Srivastava is the author of The Brown Sahebs, a novel

The North Bihar earthquake of the 15th January, 1934

World risk report 2014: the city as a risk area

Learning from megadisasters: lessons from the great East Japan earthquake