A bill, to be tabled in Parliament early next year, will promote energy conservation in the industrial sector 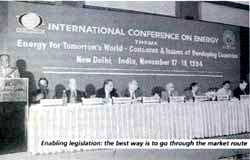 THE Union government has finalised a draft legislation to promote energy conservation in the industrial sector. This was announced by P A Sangma, Union minister of state for coal and labour, at the International Conference on Energy, held in New Delhi on November 17. Although the Energy Management Centre (EMC), set up by the Union ministry of power in 1989, was assigned the task of drafting the bill, work proceeded at a snail's pace as the centre lacked a fulltime director.

But now, the EMC's new director, Bhaskar Natarajan, is keen on launching an initiative. He says, "Earlier, the view was that the government need not interfere. It was also thought that market reforms would result in higher energy costs, forcing the industry to conserve. But now there is a consensus that an enabling legislation is needed."

An inter-ministerial working group, chaired by Shankara Guruswamy, adviser to the Andhra Pradesh government, and with representatives from various government agencies and apex bodies like the Associated Chambers of Commerce, has been set to approve the draft bill, which would be vetted by the Union ministry of power before it is tabled in Parliament in early 1995.

This legislation, says Natarajan, provides a general guideline on what industry should do. A lot of work in this regard has to be done by various state governments. The government of Kerala, for instance, has already amended its Electricity (Supply) Act, making energy audits compulsory for industry.
The legislation will target the industry first, and the manufacturers of agricultural pumpsets and domestic appliances are expected to start producing efficient systems. "The best way is to go through the market route rather than the consumer route. Energy efficiency can be improved only through the market even though you educate the consumer about the choices available," adds Natarajan. The EMC is also launching media campaigns which target specific appliances and user groups.

Says Virendra Kothari, director of Innotem Services Pvt Ltd of Delhi, which has been conducting energy audits for the industry, "Hitherto, enterprises interested in energy conservation did not know who to turn to. But now this gap can be bridged."