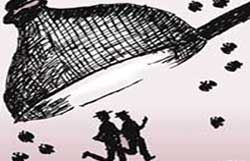 the Himalayan state of Sikkim is a paradise for nature lovers. It is also thronged by those who want to exploit the area's biodiversity for financial gains. Two Russians were arrested on July 30, 2001, for illegally collecting insects in large quantity from the remote Yuksam forest of the Kanchenjunga National Park. About 2,000 pieces of butterflies, insects and beetles, weighing about 22 kilogrammes, were seized from Victor Sinyaev and Oleg Amosov.

"The forest department had received information about two Japanese entering the forest area illegally. Following this, a search was launched. But the Japanese managed to escape and, instead, the two Russians were caught," said T R Sharma, secretary for forests in the state government. The two had used powerful lights to lure the insects into specially designed nets. They were arrested under sections 9, 50 and 51 of the Wildlife Protection Act (wpa) of 1972. The nature of their crime has been described as biopiracy. "For the time being, the two have been granted conditional bail, but they cannot leave the state before the investigation is complete. To ensure this, their passports have been seized," said Sudhir Mishra, principal legal advisor for the Wildlife Protection Society of India (wpsi), a New Delhi-based non-governmental organisation (ngo) and also advisor to the Sikkim government. Along with them, four porters, two of them Nepalese, were also remanded to judicial custody. Identification of the seized material is being done by the Zoological Survey of India (zsi). Some of the material includes species that are covered under Schedule II, part II of the wpa, under which anyone found guilty of smuggling these insects can be imprisoned for a maximum of seven years.

The two Russians claim that they are scientists and not international criminals as alleged by the authorities. "We are scientists and have papers to prove it," they told mediapersons. They exhibited documents stating that they were zoologists and entomologists attached to the Natural History Museum of Berlin. "We have captured only moths and beetles which do not fall under the protected category. There might be two butterfly species in that lot, but even they are not protected," the Russians claimed. Their visas state that they are tourists. "It is illegal to visit a country on a tourist visa and collect biodiversity," alleged Ashok Kumar, senior advisor of the Wildlife Trust of India, a New Delhi-based ngo. Even Sharma counters the claims of the Russians. "On August 8, 2001, we received a mail from Vladimar Dinets of the Moscow-based Actually Biological Fund. According to Dinets, the two Russians had self-made papers conforming they were scientists. But in reality, these two are professional criminals, who have organised large-scale collecting expeditions in various parts of Russia, Nepal, China and Tajikistan," stated Sharma. wpsi officials claim that the value of illegal international trade in butterflies and similar insects is to the tune of us $20 million annually. "There is a growing international market for butterflies and we have to immediately take steps to protect our biodiversity from such exploitation," says Kumar.

It is a well-known fact that foreigners collect insects in large numbers from the Himalayan regions. Many seizures have taken place in the past, but without any follow-up action. The first seizure took place in 1994, when two foreigners smuggling 26,000 butterflies and moth specimens were arrested at the New Delhi airport. But they were set free, as the government could not find an expert to identify whether the seized species were covered under wpa. With this most recent seizure, for the first time, Indian authorities seem to be realising the impact of such crimes. This incident is an example for other regions in India, where such illegal smuggling is rampant. "Most of the illegal collection takes place in the months of July and August. Catching the species in large numbers will disrupt the ecosystem, since these insects act as pollinators," rues Kumar.

Experts say that the threat to biodiversity arises from the flaws in the wpa. "wpa is reasonably good, but there are some loopholes in it," says Kumar. One of the main drawback of the act is that it requires the sub-species traded in to be identified. According to Kumar, identification should be limited to the species level. This will make the identification process much easier.

Even the enforcement of wpa leaves much to be desired. "The chief wildlife warden of Sikkim seemed to be unaware of the relevant laws at the time of the seizure," says Kumar. According to him, a few years back, most of forest service officers across the country were totally ignorant about the provisions of wpa. In the wake of the recent seizure, experts have raised the possibility of captive breeding. "If we have biodiversity-rich regions and a large number of insect species, why can't we breed and sell them ourselves instead of perpetuating an illegal trade?" questions Kumar. Reminded of the lax rules and even worse state of enforcement, he adds: "But we must ensure that biodiversity is not exploited in the name of captive breeding. Ecological needs must also be kept in mind."