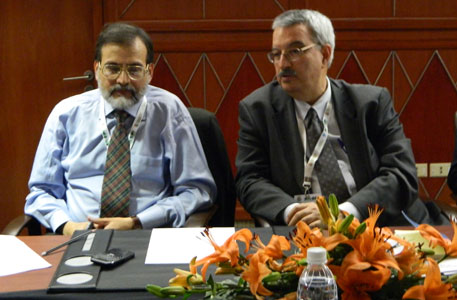 The five-day conference on biosafety, which concluded in Hyderabad on October 5, has urged all countries that are signatories to the Cartagena Protocol on Biosafety to ratify the Nagoya-Kualalumpur Supplementary Protocol. The protocol, adopted at Nagoya in Japan in 2010, deals with liability and redress for damage from genetically modified organisms (GMOs). The conference—Sixth Conference of the Parties to the Convention on Biological Diversity serving as the Meeting of the Parties to the Caratagena Protocol on Biosafety (CoP-MoP 6)—observed that the process of implementation of the biosafety protocol was progressing slowly.

In the final press conference of CoP-MoP 6, organised at the Hyderabad international convention centre on Friday night, Braulio Ferreira de Souza Dias, executive secretary of the eleventh Convention on Biological Diversity (CBD), said that getting countries to ratify the supplementary protocol was a real challenge. Out of the 193 countries that signed the Cartagena Protocol, only 51 have signed the supplementary protocol, and just three countries have ratified it. “The CBD hopes that before the next MoP we will get the 40 ratifications required for implementing protocol. We have no doubts that all parties, including India, will work for it,” Dias said.

An important decision of MoP 6 is to set up an ad hoc technical expert committee to look into socio-economic aspects of the impact of the living modified organisms (LMOs) and GMOs, and conservation and sustainable use of the biodiversity, said M F Farooqui, special secretary to the Ministry Of Environment and Forests (MoEF), who represented India. India has taken over the chair of CBD from Japan for the next two years. The committee will have eight experts from each of the five regions of the United Nations. “This committee will develop a global overview of the socio-economic considerations, keeping in mind the national and regional specificities,” said Farooqui.

Funds constraint in capacity building
The conference also decided to take up capacity building programmes since 80 per cent of the member countries, which have submitted their second national reports on biosafety, have said they feel hampered by lack of capacity in handling, transporting and identifying LMOs and GMOs, and also undertaking the mandatory assessing and managing risks related to the genetically-engineered organisms.

“But everything is subject to the availability of funds,” the executive secretary said.  The budget committee of MoP 6 has put the amount for core fund alone at US $ 5,102,400 for 2013-14. The core fund will be used mainly for payment for the CBD staff and the running establishment costs. “Definitely there is uncertainty over implementation of the programmes due to fund shortage,” said Dias. “We request all the member countries to contribute as much funds as possible.”

To a question about the possibility of biosafety concerns of CBD getting watered down under the pressure from big biotech companies, the executive secretary said the allegation was baseless. "CBD is very serious about biosafety. That's why the Caratagea Protocol came into existence. When it was felt the protocol fails to address liability and redress issues, we brought the Nagoya Supplementary Protocol. Now it's the responsibility of each member country to formulate its own legislative framework and policies," he pointed out.

When asked whether India will ratify the Nagoya-Kuala Lumpur Supplementary Protocol, Farooqui said: “We have the intention to do it, but we first need to have inter-ministerial consultations, and deliberations and discussions with all the stakeholders.”

Next stop: Korea
The conference decided that the next meeting of parties to the biosafety protocol (MOP 7) will be held in Korea.

India is happy about the decisions on the socio-economic considerations regarding the impacts of GMOs, said Farooqui. “It was we who pushed for adding national and regional specificities while developing the global overview,” he said.

The second part of the CBD, the Conference of the Parties (CoP 11), will start from Monday and conclude on October 19. The main agenda of CoP 11 will be conservation, sustainable use of the biodiversity, and the sharing of benefits arising from the use of the bio-resources.