Birds are losing their voice

Humans can keep their woes aside for a minute. Urban noise pollution is playing havoc among birds. They seem to have to sing at different frequencies to overcome traffic noises.

Just like humans, birds of the same species living in different areas also speak different dialects of their language. Some of those dialects might be disappearing completely.

Scientist David Luther of the University of Maryland and ornithologist Luis Baptista of the California Academy of Sciences in usa studied three dialects of the white-crowned sparrow’s (Zonotrichia leucophrys nuttalli) song in adjacent areas of San Francisco in California for 30 years.

Through three decades, the different bird songs were recorded, the number of birds singing each dialect was compared in 1969, 1990 and 1998. Minimum frequency of songs was measured. The results were disturbing.

The birds living in Presidio between 1969 and the 1990s completely forgot how to say hey and about 95 per cent started saying hi. The rest living on the boundaries continued to sing hey hi to each other. In Lake Merced, between 1969 and 1990, the birds greeting with a hello went down to 32 per cent and more than one-fourth took to what the Presidio birds had picked up: hi. The rest sang hello hi.

Why were birds of Presidio and Lake Merced picking up the San Francisco dialect? Greeings of ‘hi’ echoed from all three areas more in 1998 and 1990 than in 1969. The frequency of urban noise and certain birds songs’ is low and the birds cannot hear each other. So they switch to high frequency dialects.

The study published in the February 7 issue of Proceedings of the Royal Society B showed that the hi dialect was spreading from interior urban San Francisco, which has higher ambient noise, into the hey and hello dialect populations that live where lower urban noise is found. Researchers found that frequency of each dialect had also undergone major changes. While ‘hey’ went extinct by 1998, birds that said ‘hi’ in 1969 were much softer than birds that had to scream out the hi in the 1990s. 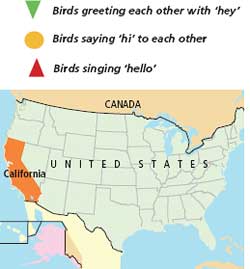 Ornithologists in India were not surprised by the findings. “Breeding bird song is an important signal as it is rich in information. A male being singled out by the female depends on the quality of the song he sings. It is also used to manage territories, duel other males and species recognition. If the song keeps changing, it could lead to a cascading effect that affects species recognition and leads to either evolution or extinction,” said Robin Vijayan, research associate at the Indian Institute of Science in Bengaluru.

Lalitha Vijayan, senior scientist at Salim Ali Centre for Ornithology and Natural History at Coimbatore said: “Though we have not studied the link between noise pollution and extinction of bird song dialects, it is quite possible changes in urban habitat, ecology and environmental pollution are affecting bird behaviour and their evolution.