Birlas fend off bid to close UP sugar mill

Hampered by a Supreme Court order, UP pollution control authorities are finding it difficult to close a Birla sugar unit emitting acidic effluents into a Gomati tributary. 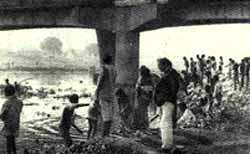 WHEN THE Uttar Pradesh Pollution Control Board (UPPCB) detected acidic effluents from a Birla sugar mill in a tributary of the Gomati, it thought it could bell the cat easily. But a Supreme Court order in an earlier environmental pollution complaint against the unit has left the board high and dry.

UPPCB ordered the Oudh Sugar Mill to close after acidic effluents were detected in the Sarain river last month. But the mill management refused to comply, forcing UPPCB to move the Special Court (Pollution Control) in the matter. On January 7, the court issued summons to mill chairman K K Birla, working chairman P K Jain and five directors and the general manager to appear before it on January 25.

On January 15, the UPPCB again ordered the mill to close down because of "continued defiance of the board directives", cut off the factory's power supply and urged the UP government to stop sugarcane supply to the mill.

On the following day, however, the Supreme Court issued an order in an earlier pollution case against the unit, allowing it to continue operations until March 31. The order also asked the UPPCB to file a fresh report on the extent of pollution in the Sarain. The next hearing in the case is slated for April 7, according to Shri Narain, counsel for the company.

The Supreme Court order has put UPPCB officials in a quandary and the board's law officer, C B Singh, refused to comment till he "went through the apex court's order". But, he contended though the mill management had closed down a distillery attached to the mill, its attitude in the case of the mill itself, "has been one of defiance."

The first report of a spurt in pollution of the Gomati came on December 12 from the Lucknow Jal Sansthan, which noted the river water had acquired a brownish hue. It said the change in colour might be because of sugar factory and distillery effluents. The UPPCB subsequently traced the polluting effluents to the Oudh Sugar Mill.

But, meanwhile, for more than a month, about half the population of Lucknow had to make do with polluted water and scores of Old Lucknow residents developed gastro-intestinal problems that sent many to hospital and took three lives.

UPPCB sources concede the Birla mill is not the only polluter. In its course upto Lucknow, the Gomati receives untreated or partially treated effluents from at least five major industrial units. Two of these -- the UP State Sugar Corp. and the Cooperative Milk Union -- are government-owned, but UPPCB officials are silent when asked what action they propose to take against them.

Apart from industrial units, the Gomati's major polluters are the civic bodies in Lakhimpur Kheri, Sitapur and Lucknow, all of which dump untreated sewage into the river. UPPCB officials estimate 75 per cent of the pollution in the river and its tributaries is caused by untreated sewage water. Again, the officials are unsure how they should proceed against the municipal bodies. They are aware that though they directed Lucknow Nagar Mahapalika back in 1984 to install a sewage treatment plant, their directive has still not been implemented.