Birth of a molecule

The first human-made three dimensional molecule, christened 'dendrimer: could give a fillip to industries like cosmetics, computer chips and gene therapy 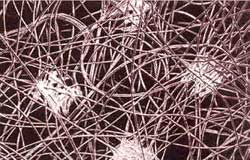 THREE times in this century, chemists have designed and manufactured artificial molecules that have launched whole new industries: nylon, polyethylene and plexiglass. Donald Tomalia, chemist and former employee of Dow Chemicals Inc, has claimed that he might have just come up with a fourth one.

Tomalia's creation is 'dendrimer', the first man-made three dimensional molecule. Nylon and polyethylene were essentially two-dimensional with a shape which closely resembles strands of spaghetti. Dendrimer molecules are round with hollow cores and have pointed ends to which various chemical units can be attached. Its unique struc- ture could provide new verve to the per- fume and skin cream industries, facilitate computer chips to store far more data and eventually pave the way for manufacturing an electronic compo- nent out of a single molecule.

Scientists are already experimenting with dendrimer to design molecular 'genetic ferries'. Dendrimers have been able to transfer genetic material at a suc- cess rate o{almost 90 per cent in test- tube experiments with more than 30 types of animal cells. The dendrimers break down inside the cells and are pro- grammed to deliver the genetic material at the required sites. "The potential for gene therapy and drug delivery is quite remarkable", says James Baker, head of the Immunology Department at the University of Michigan in Ann Arbor, US, where the experiments were carried out. He intends to test the molecules in live animals next and expects success.

Researchers at the International Business Machines Inc are busy investi- gating the uses of this molecule in elec- tronics and computer software. Craig Hawker, the chief researcher of the den- drimer project at IBM is extremely enthusiastic, "There's been nothing like this before". The hollow core, he says, can be filled with a cluster of 'doped' metal atoms that could store data in a binary form. A single molecule, he opines, can act as a small computer. It would be possible to construct electron- ic devices at a molecular level, perhaps onlya few nanometres (1 nanometre = one-billionth of a metre) across. Moreover, these molecules can be laid next to each other at a much shorter distance than the chips in the most advanced Pentium processor. The information-storage capacity of a com- puter with dendrimer chips, as a result, would be vastly increased.

Some of the immediate applications are, however, quite mundane. The French cosmetics giant, L'Oreal and DSM NV, a Dutch chemical firm opine that the molecule "will have interesting and useful applications" in shampoos, skin creams and other cosmetic paraphernalia. Products with active dendrimer cores can store extra ingredients and then release them in controlled stages.

Tomalia, however, had his usual share of obstacles associated with a revolutionary idea. He failed to convince his bosses at Dow Chemicals, who dismissed his ideas as 'frivolous science' and eventually resigned. Tomalia first got the idea of growing a 3-D molecule by observing tree cuttings. When a tree was cut, the cut sprouted two branches, each of which gave birth to two more and so on. In 1979, he combined three compounds and produced a mix that had two molecular branches. When the sequence was repeated, each of the prongs sprouted two new branches and four grew into eight and so on. The branches growing all around the core eventually met up to form a sphere. Dendrinier, named from the greek word for tree, was born. Manufacturing it is a pretty complicated process. One layer, about a nanometre in thickness, is added at a time to -the main molecule and it took Tomalia seven weeks to manufacture the first pound.