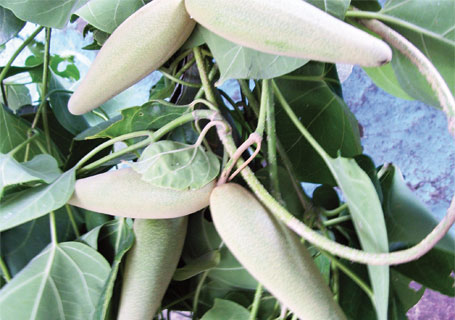 It is one season that offers the widest range of food—hundreds of varieties of wild vegetables to pick out from, swamps full of crabs and rivers and streams brimming with fish. Yet it is also the season of most illnesses—fever, flu, chills, worms, body ache and diarrhoea. Monsoon ensures survival for the whole year, that is, if, you survive it first.

Among the tribals of Maharashtra, one of the strategies for surviving the rains is to consume bitter vegetables and herbs. Some are consumed as decoctions, or kadha. But most are relished as seasonal delicacies with faith that they are good for health and should be eaten.

For instance, in Yavatmal, a district in the Vidarbha region, tribal communities consume tender fruits of ekdodi (Dregea volubilis) during the early monsoon. They believe the bitter bottle gourd-like fruit growing on a woody vine helps prevent monsoon-related sicknesses. “But they also appreciate its flavour, and a simple preparation of ekdodi with potatoes and onions is a common dish in every family in July,” says Madhukar Dhas of Dilasa, a non-profit which has studied the nutritional practices of tribals in the region. (See ‘Recipes’ on facing page). 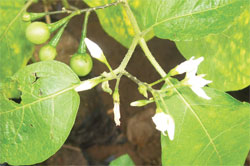 In Gadchiroli, a tribal-dominated Vidarbha district, people eat an assortment of bitters, a different variety each month. Towards May and early June, when kuda (Holarrhena antidysentrica) is in full bloom, it is time for the Gond tribals to prepare for the delicious kuda chya besan. The plant grows profusely in the hills. The Gonds pluck its tiny, white flowers, dry them and store them for consumption during the rains.

Surprisingly, the Kanwars, another major tribe of Gadchiroli, do not have the tradition of consuming kuda despite their close proximity to the Gonds. “It is only in the last decade or so that we are learning to consume kuda dishes after our own research,” says Kumari Jamkatan, a Kanwar and community worker with non-profit Amhi Amchya Arogya Sathi (AAAS), which works on community health in the region. “A large number of Kanwar families have grown fond of its smooth, slippery taste.”

Later, with the monsoon well on its way in July, both tribal groups consume a small creeper (Glossogyne pinnatifida), which they call kadu bhaji. Come August and September, it is time for the tender beans and seeds of kuda.

“There is a general understanding in these communities that bitters should be consumed during the rainy season for year-round good health,” says Jamkatan. The Kanwars have always eaten a lot of bamboo shoots, which have the same benefit as bitters, during the monsoon even before they started learning about kuda.

Consider chichurda (Solanum anguivi), a tiny, pea-sized brinjal. This is the most popular bitter vegetable during the rains for Mahadeo Koli tribals of the Sahyadri Hills in western Maharashtra. “The more frequently you eat it in the season, the better your health will be for the rest of the year,” says Dhondabai Aswale, a Mahadeo Koli of Ahupe village in the Bhimashankar hill in Pune district. “One should be careful not to eat too much of chichurda at one go because it can make one feel nauseated,” he cautions. This Ayurvedic herb, known as chichurti is Sanskrit, is also available in Gadchiroli, says Pradeep Saudagar, a microbiologist who documents tribal health practices at AAAS. But it is not consumed as a vegetable there. Tribal healers, known as vaidus, use the plant to prepare medicines.

Needless to say that the practice of consuming wild bitters is on the decline. “Children and the young are developing a taste for food products available in the market,” says Jamkatan. It is not easy to assess the health impact of this changing trend. “Visits to doctors have no doubt gone up in areas where consumption of bitters has declined,” says Kusum Karnik of non-profit Shashwat which works among the Mahadeo Kolis. “But it is difficult to establish the link as all bitter foods do not have similar nutritious and medicinal properties. Health-giving qualities tribals attribute to these foods are also different from what is believed by other systems of medicine.”

In Gadchiroli, however, AAAS has been able to tentatively link at least one ailment to the lack of bitters in food—intestinal worms. Says Saudagar, most tribal mothers here feed seeds of vavding (Embelia ribes) to their children to eliminate worms. It is believed that teens and adults do not get worms as they eat bitters. However, during a study, AAAS found severe worm infestation as the leading cause of anaemia in teenage girls. “While it is very likely that the decline of bitters in diet is a culprit, more study is needed to draw the conclusion,” he says.
Food Yavatmal (D) Vegetables Vegetables Tribals Traditional Knowledge Traditional Knowledge Nutrition Nutrition Monsoons Maharashtra Health Gond Gadchiroli (D)
SUPPORT US