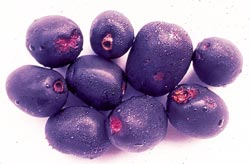 indian scientists have extracted a herbal therapeutic drug with promising anti- diabetic properties from black plum fruit, which is better known as jamun in northern parts of the country. The product, isolated and purified from the fruit pulp of jamun (Eugenia jambolana), has won researchers from the University College of Medical Sciences, New Delhi, a process patent from the us Patent and Trademark Office. "The new product is found to be an excellent agent for treating both severe and mild forms of non-insulin dependant diabetes mellitus," said Suman Bala Sharma, principal investigator of the study.

Sharma and her colleagues demonstrated that four hypoglycaemic (blood sugar lowering) compounds in the fruit could reduce the blood sugar level considerably when they were orally administered to diabetes-induced animals. Besides this, toxicological studies proved that they do not have any side effects.