E-mail>> Occupy Movement • The US 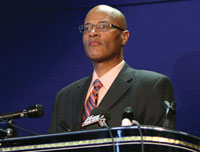 The chief of Oakland’s police, who faces legal action that could imminently remove him from office, says he failed to read crucial messages about the upcoming court case because he uses a spam filter to automatically delete critical emails from the public. Howard Jordan has confessed that, for almost a year, any message containing such phrases as “police brutality” or “occupy Oakland” went straight into the trash bin of his account.

In December a San Francisco court will decide if Jordan’s department is culpable of repeated use of excessive force, accusations stretching back to last year’s Occupy protests. Among important messages that Jordan missed was one from Robert Warsaw, a court-appointed monitor of the police department, titled: “Disciplinary actions—Occupy Oakland.” The chief did not apologise but said he regretted that the important email had gone astray.