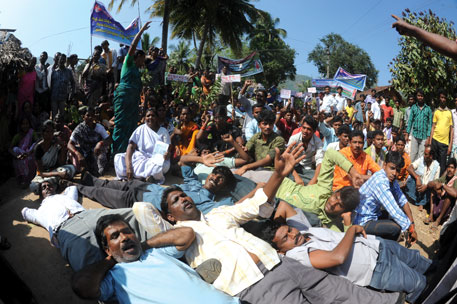 DESPITE stiff opposition from residents and activists, the Andhra Pradesh Pollution Control Board (APPCB), on November 17, held a public hearing for a proposed laterite mining project at Bhamidika, a notified Scheduled Tribe village in Visakhapatnam district. Protestors say the mining will cost the tribes their livelihood and land, and put the area’s ecology at risk.

There are 16 villages on and around a hill in Sarugudu gram panchayat in Nathavaram mandal where the mining has been proposed. It is home to about 4,000 families belonging to Kondadura and Bhagata tribal communities.

In December 2010, the state granted a 14-year lease to J Lakshman Rao, said to be a tribal businessman from a neighbouring mandal, to mine laterite. Laterite is used for manufacturing cement. The project proponent plans to extract one million tonnes of laterite annually from 121 hectares.

APPCB, in its notification for the hearing issued on 15 October, refers to the project area as “unsurveyed hill portion” while the area is covered with thick forest. “If mining is started, we will lose everything, our crops, water and livelihood,” says Gangaraju, president of Giriputra Welfare Association, a group working for the welfare of the tribes in the region. Villages grow pulses, mangoes and cashew nuts.

The environmental impact assessment (EIA) report of the Rs 80 lakh project is misleading (see ‘Cut and paste job’). It says the site is devoid of natural vegetation and mining will not harm the ecology. “The report has deliberately omitted any reference to the fact that the site falls within a Schedule Five area and there are tribes whose livelihoods would be affected,” says E A S Sarma, former commissioner for tribal welfare. “How can unsurveyed land be handed over to miners?” he asks.

Though the project proponent is said to be a tribal, local media claims he is legally a non-tribal autorickshaw driver. Under the Andhra Pradesh Scheduled Area Land Transfer Regulation Act of 1959, tribal land cannot be transferred to non-tribals in notified areas. “This is a benami project. How can an autorickshaw driver invest Rs 80 million?” asks G Srinivas of Samata, an NGO working among the tribes in Visakhapatnam. There is a strong mafia of cement firms behind the mining proposal in Nathavaram mandal, he says. Ahead of the hearing, the mafia is alleged to have tried to create a wedge among the tribals to seek support. They have divided the tribals by promising them roads and school, and distributing liquor and money, says Narasinga Rao, district secretary of the Communist Party of India (Marxist), the only political party openly opposing the project. During the hearing, people from eight villages on the hill opposed the project, and those from the nearby villages supported it.

What’s more, the project violates the Supreme Court’s Samata Judgment of 1997 that says revenue land, forestland and tribal land in Scheduled Areas cannot be sold or leased out to non-tribals. It also violates the Panchayats (Extension to Scheduled Areas) Act (PESA) and forest and mining laws. The project proponent has not taken consent from the tribal gram sabha and the tribal advisory council as required by PESA, says Ravi Rebbapragada, executive director of Samata. APPCB member secretary M Dana Kishor says the board is not aware that the proposed mining area is a notified tribal village. “The proponent sends the EIA report to the Union ministry of Environment and Forests and it is the ministry that will give environmental clearance. The board has no role in it,” he says.
News News News Vishakhapatnam (D) Tribals State Pollution … Public Hearing Panchayats Ministry Of … Ministry of … Mining Laterite Environment Impact … Ecology Ecology Cement Industry Cement Industry Cement Andhra Pradesh
SUPPORT US