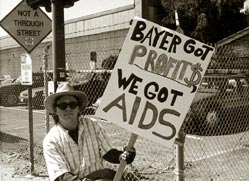 a group of haemophiliacs, who contracted aids and Hepatitis b through blood transfusion, recently filed a lawsuit in the federal court in San Francisco against four manufacturers of clotting agents. The two components of blood -- Factor viii and Factor ix -- are called clotting agents. Haemophiliacs require frequent transfusions since their blood lacks these coagulants.

The petitioners contend that the companies deliberately sold unsafe clotting factors viii and ix in early 1980s. It was also revealed that in 1984, when the companies launched their new products in the us, they sold the old stocks in Asian and South American countries.

The plaintiffs have substantiated their case with a telex from Bayer to a distributor, according to which the company had not applied for permission to sell the new product in Taiwan until July 1985. This was about a year and a half after it began selling it in the us. On their part, manufacturers claim that at that time they lacked sufficient information about the mode of transmission of the virus through blood products such as clotting agents. The companies maintain that the new products were not introduced in foreign countries at the same time as in the us due to delays in registration procedures.

Around 5,000 people in Europe, 4,000 in Japan, 700 in South America, and 100 in Hong Kong and Taiwan contracted the diseases through infected blood.

"Due to lack of safe blood, more than 80 per cent of haemophiliacs are bound to get infected," points out Ashok Verma, executive director, Haemophilia Federation of India, a non-governmental organisation. "We should promote voluntary donations by safe donors," avers N K Bhatia, deputy director of Rotary Blood Bank in Delhi. Significantly, only 17 per cent of donated blood falls in this category in India.

The recent case of a 10-month-old child in Rajkot, Gujarat, detected to be hiv positive after receiving infected blood during an operation underscores the need for better screening procedures.