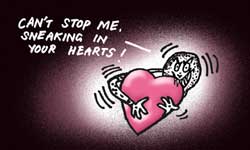 small particles, similar in size to those found in air pollution, can enter the human bloodstream from the lungs, researchers recently discovered. The finding is very significant because, for decades, it was believed that the lung-blood barrier is impermeable for particles and it only allows the passage of gases or vapours. Experts opine that the finding would immensely help in explaining the poorly understood relationship between air pollution and cardiovascular diseases. Researchers from the Belgium-based Katholieke Universiteit Leuven made the discovery with the help of an imaging technique that uses a radioactive isotope (www. reuters.com, February 19, 2001).

"What we showed is that this barrier might be more permeable than what was thought, especially in the context of the smaller particles," explained Ben Nemery, one of the researchers. "The fact that small pollutant particles can penetrate deep into the blood circulation can explain why people die from cardiovascular causes like heart attacks as a result of increased urban air pollution," he said. "However, there are also other possible mechanisms, and we do not claim that our data gives a final explanation."

During the investigation, five non-smoking men between the ages of 24 and 47 were made to inhale radioactive particles. Immediately after inhalation, the men underwent body scans that monitored the particles as they travelled from the lungs into the bloodstream and to different organs including the liver and bladder. The men also had several blood samples drawn throughout the scanning procedure that lasted for about 60 minutes.

"The radioactivity was detected in blood exactly after a minute of inhalation. It reached a maximum between 10-20 minutes, and remained at this level for up to 60 minutes," the researchers said. They noted that the radioactive ultra-fine particles used in the study, which are considered to be very similar to the ultra-fine fraction of actual pollutant particles, travelled rapidly into the bloodstream. According to them, this proves that many cardiovascular illnesses and deaths are related to ambient particulate matter. "The implications of our findings are alarming. These particles are not only harmful by themselves but they also carry toxic or carcinogenic substances on their surface," said Nemery. However, he added, the danger of inhaling particles is mainly for people who are already suffering from heart or lung ailments.