Blowing out a tradition 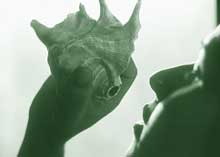 the familiar sound of conch shells (shankh) resonating during auspicious occasions may soon be a thing of the past, courtesy a recent Union government decision. The July 11, 2001, gazette notification by the Ministry of environment and forests has de facto banned the harvest, processing, stocking and sale of Xancus pyrum (conch shell), along with about 50 other mollusc species.

Authorities are cagey, but justify the move stating that conch shells are threatened due to overexploitation. Though environmentalists are in consonance with the government over the mollusc's dwindling numbers, they feel that the remedial measure is too severe.

The ban has set the alarm bells ringing within the conch shell industry in the country. At stake are the livelihoods of at least 1-1.5 million people, who will be affected either directly or indirectly.

Apart from the financial repercussions, there is another dimension to the mollusc. Social scientists feel that conch shells -- synonymous with rituals and originating from religious beliefs -- have, over a period of time, blended with the social fabric.

The major seacoasts from where they are lifted include parts of Kerala; Kanyakumari, Rameswaram and Tuticorin in Tamil Nadu and Surat in Gujarat. They are also imported from Sri Lanka. Their market extends across the country with the bulk of the demand coming from West Bengal, Assam, Tripura, Orissa, Uttar Pradesh and Jharkhand.

In West Bengal, the Sankha Shilpa Bachao Committee has been set up in a desperate bid to save the industry. More than 300 activists have already signed up as members. "There are about three lakh conch shell artists and traders in the state," says Sibu Nandi, the joint convenor of the newly constituted panel. "Most of them have an age-old association with the industry, making it virtually impossible for them to start afresh," observes Indrajit Nandi, who himself belongs to the fourth generation in his family that is part of the trade.

The government is armed with data that conch shells are facing extinction due to excessive lifting. This has necessitated enforcement of the sweeping ban, reveals S C Sharma, additional director general of forests, Union ministry of environment and forests, in a terse explanation.

When asked if any time-frame had been fixed during which it would be in force, Asim Shrivastava, deputy inspector general of forests in the Ministry of environment and forests, is guarded. "We are in regular touch with all the concerned parties, including non-governmental organisations. We will keep reviewing our decision. But the ban stays for now." On curbing trafficking, he says, "We are coordinating with the police, fisheries and customs departments so that we can stop any kind of illegal trade."

Environmentalists do not buy the Union government's rationale in its entirety. Marine biologist Amalesh Choudhury concurs with the view that conch shells are fast disappearing. "Just a few years back, I had spotted about 52 species of shells along the coastline from Digha to Talsari. It is a cause for concern that most of them have virtually vanished now," he observes. The scientist, however, advocates rotational and restricted lifting instead of the complete ban. This could be a practical solution since lifting operations take place for only four months in a year, he feels.

Another environmental activist, Biswajit Roy Choudhury, feels that such decisions are rarely based on sound research. They are more of knee-jerk reactions, leading to trafficking and defeating the very purpose of the regulation, he avers. The industry, too, shares this view.

The traders have conveyed their anguish to the State government, which is learnt to have lent an ear. Sources in the Left Front dispensation reveal that chief minister (cm) Buddhadeb Bhattacharya has asked the state minister for cottage and small-scale industries, Bansa Gopal Choudhury, to get down to the nitty-gritty of the matter in consultation with state forests minister Jogesh Burman. The cm will act upon their advice and raise the issue in the appropriate Union government forum.

Meanwhile, activists from all over the country have converged in Delhi and launched an indefinite stir against the Union ministry of environment and forests. It now remains to be seen whether the powers that be will rethink the whole gamut of the issue and address the grievances of the shell-shocked industry.