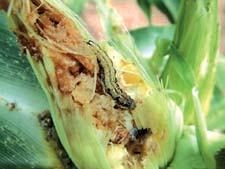 tackling pests could just get easier. Helicoverpa Armigera Nuclear Polyhedral virus (hanpv), a microbial insecticide, has so far failed to tackle the Helicoverpa armigera or bollworm, a pest that attacks cotton, redgram, tomato, chillies and other horticultural crops. A new study has, however, found a method to make hanpv effective enough to be used against the pest.

The insecticide does not function against the pest because of a time lag between the intake of the lethal dose and its effect on the pest. The dose takes about three to 10 days to act on the pest.

D N Kambrekar of the University of Agricultural Sciences, Dharwad in Karnataka, has found two virulent forms of hanpv: Gulbarga and Coimbatore.These forms act on the pest within three days and prevent about 40-60 per cent of crop loss and damage.

"Bollworm found in different geographical locations varies genetically. We have identified two varieties, Gulbarga and Coimbatore, which kills 60 to 70 per cent of the worm within three days, thus negating the destructive effect of the pest," says Kambrekar, the lead researcher. Besides, these isolates act faster, compared to other isolates. The economics of each isolate also work out to be cheaper.

The study presented in the Science Congress 2007 held in Chennai from January 3-7, evaluates hanpv collected across the country and shows variation in its genetic and biological activity. hanpv was collected from Karnataka, Maharashtra and Andhra Pradesh and their virulence and other biological activity was studied at the University of Agricultural Sciences.

According to the study, the performance of Gulbarga and Coimbatore isolates was noteworthy under both laboratory and field conditions. These have also reduced the cost on plant protection, thus increasing the net profit. The isolates, which have been identified, will now need to be cultured and kept ready in case of pest infestation.

"Bollworm leads to an annual loss of us $5 billion worldwide. The loss of redgram and Bengal gram is around us $27 billion annually. But with these new isolates, we can hope to save about 40-60 per cent of the losses," says Kambrekar. He has been awarded the young scientists award 2007 at the Science Congress.