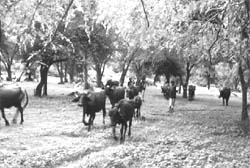 every year, a series of conflicts between the villagers and the forest officials disturbs the tranquillity of the Ranthambhore National Park in Rajasthan. This year, on 21st July the forest guards even resorted to firing 17 rounds during a clash with 10 villagers of the Uliana village, who were found grazing a herd of some 150 buffaloes in the core area of the park.

Declared a sanctuary in 1955, the Ranthambhore National Park covers an area of 393 square kilometres. A treat for wildlife enthusiasts, even us presi-dent Bill Clinton took time off from his hectic visit to India to trail the tigers. The park constitutes a core area, which is the restricted territory, and a buffer area, which is inhabited by the villagers. This division is the root of all the conflicts.

The villagers have been depended on the park resources for centuries to meet their daily fuel and fodder needs. After their resettlement outside the core area of the park, they feel they have been denied access to the natural resources of the forest, they once called home. But, park authorities feel conservation is possible only when there are no human intrusions in the core area of the park.

"The number of conflicts increases during the monsoon season as heavy rainfall prevents us from protecting our fields from the park animals, who destroy them completely. Left with no option we have to trespass into the restricted areas of the park and allow our animals to graze there. This leads to a conflict," says Jayaram, a resident of Uliana.

"The conflict between the villagers and the officials can be dated back to the time when 'Project Tiger' was started two decades ago. The situation worsened gradually," says G V Reddy, district forest officer. Even the eco-development project of the government started in 1991, which seeks to keep the core area of the park free of all human activity and simultaneously develop the reserve's periphery for multiple use by local people, could not bring respite to the life of the villagers.

"The money for the eco-development project was given five years ago but not even one per cent of it has been used till date. The present field director is not using the money the way it should be used," says Fatehsingh Rathore, former field director of the park.

Rajeev Tyagi, the current field director, however, refutes Rathore. "The project is being implemented as per schedule. I am not responsible for all the problems being faced by the villagers," he says.

"Fencing of the park's core area is the only way to avoid conflicts between authorities and the villagers. If the villagers really want to save the wildlife, hard decisions have to be taken in terms of policymaking," he added.

The villagers, on the other hand, feel that greater participation by them is required in the decision making process. "Various schemes are introduced by the government for our benefit but we hardly come to know about them," says Dara Singh, a resident of Uliana.

According to the villagers, neither the eco-development project nor Project Tiger can bring respite to them. They want greater level of flexibility and communication with the forest officials to solve their problems. They also feel that the officials are not managing the park well and this is leading to the destruction of the forest. "When our village was inside the park, the forest was safe as we use to protect it. After our displacement, things have changed and we have witnessed nothing but the gradual destruction of forest," says Badrilal, a resident of Gopalpura village, which was resettled 20 years ago.
The villagers are ready to obey the conservation rules if the government authorities ensure that the park animals will not destroy their fields. "Let them manage their animals, we will manage ours," says Ramnarayan, who was earlier the village head of Uliana.