Kyoto Protocol’s future uncertain after the stalemate in Germany

The only global treaty that legally binds rich countries to cut greenhouse gas (GHGs) emissions may not get a new lease of life, after all. That’s what the latest climate negotiations at Bonn point at. Delegates from 194 countries met in June in the German city for climate change talks, which included discussions on the future of Kyoto Protocol, accounting loopholes in calculation of emissions and the need to undertake ambitious emission cuts.

After two weeks of negotiations ending June 17, the rift between developing and developed countries over the Kyoto Protocol deepened.

Adopted in 1997 and implemented in 2005, the Protocol is a cornerstone of the UN’s Framework Convention on Climate Change (UNFCCC). It commits to reduce GHGs by five per cent below 1990 emissions levels by 2008-2012 to keep global temperature below 2°C by 2020. Scientists say increase beyond this may lead to a tipping point in the atmosphere, causing irreversible and catastrophic damage. Intergovernmental Panel on Climate Change (IPCC) estimates 30 to 40 per cent emissions reduction below 1990 levels is required to contain the rising temperature.

The Annex 1 (industrialised) nations, including Japan, Russia, Canada, Australia and New Zealand, bluntly said they do not want a second commitment period of the Protocol, which ends in 2012, until emerging nations like China and India also accept binding emission cuts. They are in favour of legally non-binding, voluntary pledges, which they took last year at Cancun (see ‘Cancun clinches deal—for polluters’, Down To Earth, January 1-15, 2011). Developing nations, however, pushed for the Protocol to be renewed in its current form. According to negotiators from developing countries, the differences are political in nature. “Technical progress would be a waste of time if there is no consensus on the political issues,” says R R Rashmi, one of the Indian negotiators at Bonn. “Extension of the Protocol is non-negotiable for us. We are not even serious in discussing the technical aspects if the treaty is dead,” he adds. The EU, which has done fairly well in reducing its emissions, says it will sign for a second commitment period under the Protocol only when other developed countries do so.

Rise and rise of emissions

Global emissions dropped between 2007 and 2009 owing to recession. But they rocketed to an all-time high in 2010 after the world economy recovered. The developing countries emitted more GHGs in 2010 than their developed counterparts, according to a report published this year by the Paris-based energy organisation, International Energy Agency (see graph). But if one compares per capita emissions, developed countries collectively emitted 10 tonnes compared to China’s 5.8 tonnes and India’s 1.5 tonnes in 2010, the report notes. China and the US are the world’s top two carbon emitters. But the Protocol does not bind China’s emissions due to its status as a developing economy and the US is the only industrialised country not to ratify the treaty. “The way the emissions are increasing is indeed worrying,” says Fatih Birol, chief economist of the International Energy Agency. It is becoming extremely challenging to keep global temperatures from rising by more than 2°C by 2020, Birol adds.

How to reduce emissions on paper

A couple of reports have analysed the voluntary pledges that developed countries took at Cancun. They found that Annex 1 countries can meet their pledged targets, which are modest to begin with, without investing in any of the mechanisms that reduce GHGs, like shifting to renewable energy resources.

Thanks to accounting loopholes, the pledged targets can be met, says Sivan Kartha, senior scientist at Stockholm Environment Institute, who compiled one of the studies. One way by which countries could cheat is the fact that emissions from aviation and shipping are excluded from the Protocol, and therefore from developed countries’ emissions accounting. Another loophole is a surplus of Kyoto credits, called Assigned Amount Units (AAUs), from the current commitment period of the Protocol. Under the Protocol, countries could buy and use these credits to offset their own pledged emissions reductions. Each unit is equivalent to a tonne of CO2. “If a second commitment period is added and countries carry forward the surplus AAUs to the second one, there will be similar accounting error,” says Kartha. The scientist points out two other loopholes, double accounting, where two or more organisations or countries claim ownership of emission reductions at the same time; and land use, land-use change and forestry (LULUCF) emissions. Using LULUCF loophole, the Annex 1 countries can choose to list activities that remove carbon from the atmosphere, but at the same time they can choose to ignore land-related activities that actually contribute to GHGs emissions.

“The solution is to close these loopholes but this is very difficult politically,” says Kartha.

Niklas Höhne, director of energy and climate policy at the Dutch energy efficiency consulting company Ecofys, who conducted the second analysis, says, “None of the developed countries scaled up their GHG reduction ambitions, making it easy for them to meet their modest targets.”

The much-touted gigatonne gap, the gap between emission reduction pledges and what is required to contain temperature to 2°C, should be between 4-5 gigatonnes a year (GtCO2/yr), says a study by United Nations Environment Programme. “After adding reduction proposals of countries and considering accounting provisions, expected global emissions leave a gap of 12 gigatonnes a year by 2020,” says Höhne. If countries apply the most stringent measures with strict accounting, the gap would shrink to 8 gigatonnes a year, adds Höhne.

Although China is today’s top GHG emitter, it has improved when it comes to energy efficiency (energy consumer per unit of GDP). “It achieved a 19 per cent improvement in energy efficiency between 2006 and 2010, only one per cent short of its target,” says Höhne.

Martin Khor, executive director of South Centre, a intergovernmental think-tank based in Geneva, says it is clear that the southern countries like China are doing their best to cut 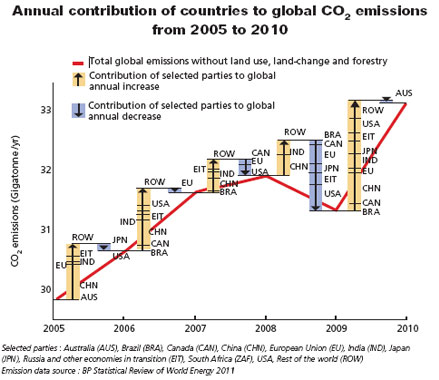