Indian systems of medicine could receive a big boost if they could yield a cure for just one major disease. And, theoretically, there can be a cure in traditional systems for HIV / AIDS. For HIV depresses the immune system and traditional medicines are said to work by boosting immunity 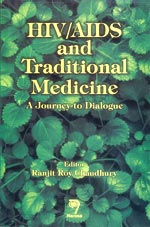 The book makes a sincere effort to readdress this problem. It also tries to ascertain if hopes for finding a cure for aids can really be pinned on traditional medicines. It has a series of papers by traditional experts, modern practitioners, non-governmental organisation workers and policy makers. These papers were generated at a meeting held in Delhi in November, 2000. Work being carried out by Ayurvedic and other experts towards finding a cure for aids were discussed at the meeting. The meeting focussed on finding an interface between traditional and modern systems of medicine for the specific purpose of finding a cure for aids. Factors which could impinge on creating such an interface, such as the intellectual property rights regime and community rights, were also discussed at the meet.

The compilation starts well with an overview on aids research being carried out in traditional medicinal systems in different parts of the world. There is a special focus on the African experience where quite a few trials on use of herbal medicine towards finding a cure for aids are being carried out. Results of some preliminary clinical trials being carried out in India are also presented. While some papers, such as those on studies on a neem-based contraceptive, are informative, others are basically anecdotal.

The information that this book provides will be a good guide to people intending to explore traditional medicinal systems in order to find a cure for aids. It could also help in removing the doubts about the efficacy of traditional systems of medicine. The book focuses extensively on analysing ancient texts to find similarities between diseases explained in the books and aids. And this gets repetitive at times for most papers try to find this connection. While the linkage might prove useful in the long-term, the experts could have made their papers more useful by short-listing some likely treatments, prescribed in ancient texts. Anyways, this book is a good begining.