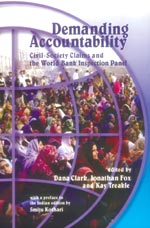 Over the last two decades, there have been increasing efforts to secure accountability and transparency in dominant international institutions such as the World Bank. While governments of developing nations fall back on the bank (and other such institutions) in times of financial need/crisis, these institutions are also favourite whipping horses of civil-society organisations (csos), non-governmental institutions (ngos) and academics. The response of the World Bank to the transnational protests of its policies and programmes was to set up the World Bank Inspection Panel -- an institutional innovation. Local people, affected by a World Bank funded project, can file a complaint with it and request for an investigation to assess whether the bank has followed its own environmental and social policies, such as fighting poverty or pursuing sustainable development.

This edited volume puts together nine case studies of claims against World Bank projects and their outcomes. The issues covered include securing adequate compensation, overhauling energy sectors, meeting sustainable development goals, including local communities in planning processes and resettling populations in a manner that affects indigenous communities and their culture. The case studies are from countries as diverse as Argentina and Bangladesh. From India, the Singrauli (National Thermal Power Corporation) industrialisation case has been detailed.

It is significant that the inspection panel gives a hitherto unheard of opportunity to non-state actors like nomads, indigenous communities, subsistence farmers and the urban poor to stake their claims. The bulk of the claims it had to respond to were against large infrastructure projects, energy and extractive projects, rural development projects and structural/sectoral adjustment programmes. Despite the Bank having its own environmental and social safeguard policy, it is noteworthy that these are precisely the issues emerging in most of the claims filed before the panel. Despite the common refrain that claims to the inspection panel are spearheaded by Northern ngos, the volume establishes that in a majority of the cases the claims were generated exclusively by Southern csos in collaboration with affected communities; in some cases, a South-North coalition was at play.

The claims obviously triggered strong reactions from the bank management and its board. In only four cases did the management acknowledge some failure in complying with the bank's policies. But in fourteen cases, the panel found evidence that the claimants' allegations of policy violations were valid.

The volume criticises this culture of "impunity". But this reviewer feels that roles of the borrower-country governments and their implementing agencies -- that often fail to comply with the stated objectives of Bank-funded projects -- have to be studied in more detail before arriving at such strong conclusions. What has been documented is the political efforts of the borrowers in bypassing the claims, though the countries of the North have often been sympathetic to claimants. In this context, the supervision policy of the Bank needs to be focussed upon. This policy is meant to ensure that governments and project authorities meet safeguard and loan conditions during the project implementation stage. It prevents the bank from shifting blame for implementation failures to the borrower.

The process of public accountability for an international institution needs to be situated within a nation's own political context of arriving at desired outcomes -- as rightly highlighted by the editors. One would like to think that the borrower and the bank together share responsibility for the failures in conceptualisation and executing projects. Or, is it that the notion of impunity extends to the borrowers as well, and if so, why? The book documents past claims in which the borrowers and the bank management generated "action plans" which pre-empted further investigations by the panel even when there was prima facie evidence of violations. However, faith in the panel's potential has been restored, with recent decisions of the bank's board approving panel recommendations for investigations. The fear of an inspection panel claim could deter funding of "high risk" projects involving forestry, mining and dams. On the other hand, as this volume shows, it might serve to improve the bank's transparency.

This work contributes to the larger debate on reforming multilateral institutions and is recommended for those interested in development paradigms of the South.