Bottled water norms not in place

On April 1 this year the revised norms for bottled water should have come into force, but didn't. By missing the deadline -- which ironically coincided with All Fool's Day -- the Union government may have played a practical joke on millions of people consuming packaged water 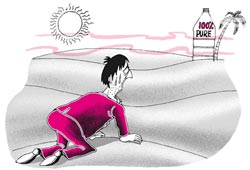 on april 1 this year the revised norms for bottled water should have come into force, but didn't. By missing the deadline -- which ironically coincided with All Fool's Day -- the Union government may have played a practical joke on millions of people consuming packaged water. And it definitely isn't in good taste.

The Bureau of Indian Standards (bis) had proposed the reworked stringent standards, entitled 'Amendment No 4 February 2003 is 13428:1998 packaged natural mineral water -- specification'. The norms were to be implemented on the stipulated date after being duly notified under the Prevention of Food Adulteration (pfa) Rules, 1955 (see box: Proposed amendments). Union minister for health and family welfare Sushma Swaraj gave an assurance to this effect in the Lok Sabha on February 20. Not only has the promise not been kept, the government is busy making excuses for the delay.

"The ministry has received several comments on the draft notification which are being studied at present. The final notification should be out in a week's time," says S R Gupta, assistant director general, Union ministry of health and family welfare (mohfw).

The only positive development to have taken place so far is the central committee for food standards' (ccf) recent decision to go ahead with the proposed amendment and send it to Swaraj for final notification. The ccf is India's apex body for prescribing norms for food items. "We proposed amendment no 4 on February 8, 2003, and feared that vested interests might try to dodge it. But I am glad that the committee has cleared it," says a ccf member. ccf's clearance signifies that a scientific decision on pesticide monitoring in bottled water has been taken. What remains is the political nod. If the government reneges now, it would knowingly be jeopardising the health of millions of people.

It may be remembered that the need to revise these norms was felt after New Delhi-based non-governmental organisation Centre for Science and Environment's (cse) expos on the bottled water industry. cse analysed 17 brands of packaged water and found high levels of pesticides (see: "Pesticide residues in bottled water", February 15, 2003) in most of them. The study questioned the rules governing bottled water monitoring and the method used by the bis to analyse pesticide residues in water. The resultant furore sent the bis -- along with the mohfw and Union ministry of consumer affairs -- into a tizzy. But with the passage of time, there has been a dilution in the initial sense of urgency to remedy the situation.

A bis official discloses that the entire process may be derailed with the setting up of a new three-member panel. "What is the rationale of taking this step when the ccf has already cleared the bis amendment?" he wonders. bis director general Nirmal Singh, who is chairing this committee, could not be contacted despite repeated attempts. While sources say that the two other members are from the department of consumer affairs and mohfw, Gupta denies this.

Even as the bottled water issue remains on the boil, experts point out that standards for pollutants in food items, too, must be reinforced. "They are as ineffective as those for bottled water. All norms under pfa rules must be on par with the global best," opines Chandra Bhushan, coordinator of cse's green rating project. He adds: "If the government is taking so much time to amend bottled water standards, it is anybody's guess when -- or, if at all -- other norms would be revised.

Meanwhile, fingers are being pointed at the beverages and soft drinks industry also. According to a bis official: "Questions on the safety of soft drinks are valid, as they are not governed by bis standards. They come under the Union ministry of food processing industries, and are governed by a separate set of guidelines -- the Fruit Products Order (fpo), 1955." After bottled water, some hard facts about soft drinks?