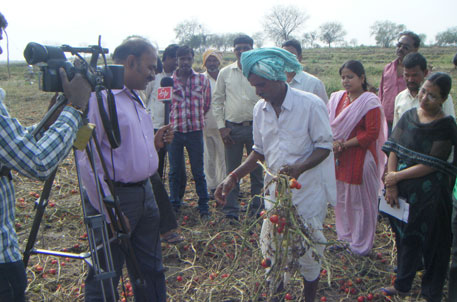 People of several villages in Rangareddy district of Andhra Pradesh witnessed something they have never seen before on Tuesday night. Hail stones the size of boulders rained from the sky, destroying crops, damaging houses and killing cattle. Unconfirmed reports say a few people were killed in the freak weather incident. By morning the affected area was covered by a blanket of snow and women were seen trying to remove the hail stones with brooms in vain.

According to preliminary reports, crops in about 850 hectares (ha) were destroyed following the following the unusual hailstorm.  This includes 445 ha in Chevella and 405 ha in Moinabad mandals. Though hail is not new to the area, what was unusual was that the affected area was under 30 cm thick ice cover formed by the hail stones.

D Ramesh, assistant director for horticulture in Rangareddy district, said the most impacted areas are seven villages in Chevella mandal and three in Moinabad. “Crops like tomato, cabbage, onion, leafy vegetables, mint, coriander and flowers like chrysanthemums grown by the farmers in the area have been completely destroyed,” he said.

According to the preliminary investigations, around 1,200 to 1,300 farmers have been affected. Ramesh added that survey on losses was still being conducted and it will take around two to three days to ascertain the total amount of loss. “The hail was so sudden that farmers and residents didn’t get any time to rescue their cattle,” he said.
Government officials who visited the affected areas said that residents in their statement said that boulder sized hailstones started falling around 8.30 pm on Tuesday night. It was accompanied by thunder-storm, lightning and light showers. On Wednesday morning, residents found thick fog engulfing the region and the roads and fields covered with snow. Visibility was almost zero.

Survey by government officials was going till late Thursday evening. They confirmed that there was loss of life and cattle deaths, but could not give any numbers. G Sudhakar Rao, director-in-charge of Metrological Centre Hyderabad, who was visiting the affected area on Thursday, said it is for the first time in Andhra Pradesh that hail has covered an area like snow. “It is a completely unusual phenomenon and hailstorm like this often occurs when clouds rise above the height of over 10 km. It is a rare thing which has happened.” The scientist added his department had issued an advisory for thunderstorm and heavy rainfall but due to absence of an observatory in the district, they were unable to predict the hail.

He added that it is an extremely rare event. “Global warming can be a contributing factor but it will take a little time to study the whole patterns to draw some conclusion,” added Rao. Met department scientists explained that hail is a frozen raindrop while snow is made up of one or more tiny ice crystals. Surface temperatures are the deciding factor whether a thunderstorm is accompanied by hail or snow.