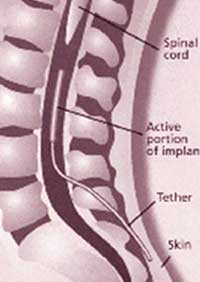 cows are creating news again. They have been instrumental in relieving the pain suffered by six terminally ill patients in Switzerland. When cultured cells from the adrenal glands of cows were implanted into the spines of these patients, they produced a cocktail of natural painkillers. The various painkilling molecules produced by chromaffin cells are catecholamines, enkephalins, neurotensin and somatostatin. And these painkillers seemed to produce fewer side-effects than other drugs like morphine ( New Scientist , Vol 151, No 204).

This unusual experiment was carried out by a team of researchers from the University of Lausanne in Switzerland, Brown University and the biopharmaceutical company Cytotherapeutics, both of which are based in Rhode Island, us . The initial problem was to protect the implanted cells from the immune system of the patient, without affecting the circulation of the painkilling molecules. This was ensured by encasing the cells in a semi-permeable acrylic polymer membrane which gave the implant a tubular look. When inserted into the spine, the membrane surrounding the implant prevents anything with a molecular weight of more than about 50,000 to travel through it. By doing so, the membrane prevents large and complex molecules of the patient's immune system from reaching the chromaffin cells. Tiny pores on the membrane allow basic nutrients to reach the cells and the small painkilling molecules they produce, to pass into the spinal fluid.

Since the implantation of tissues from other species into humans is fraught with the danger of infection, the team has worked hard to minimise this risk. The proteins responsible for spreading diseases like scrapie in sheep and bovine spongiform encephalopathy ( bse ) in cows among humans, are reportedly small-enough to pass through the membrane. But the researchers claim that the chromaffin cells are cultured after having undergone careful testing and sourcing from cows that are free from bse .

The researchers, under the direction of Michael Lysaght, filled the implant with around two million chromaffin cells. The cells then produced the painkilling substances. These were then inserted into the spines of the six patients who were using morphine as a painkiller. The implants remained in place for between 41 and 176 days. Interestingly, all six patients said that the implants made them feel more comfortable and enabled them to reduce their intake of conventional painkillers. In fact, one of them totally stopped taking painkillers.

Significantly, on removing the implant, researchers found no fibrous cells sticking to it. This was a sign that proved that the surface of the implant had not aggravated the immune system. They found that chromaffin cells were still secreting as much of their chemical cocktail as they did when they were first inserted. With the success of these initial trials, more are planned for the us and a bigger one is to be conducted in Switzerland itself.