Are X-rays damaging the brains of foetuses? 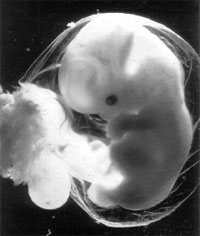 roentgen would have been proud if he was alive today to see how the x-ray, his invention, has become indispensable to the medical world. For more than half a century now, this invention has been helping medical practitioners administer better healthcare services to millions. And if the most crucial inventions in medical science were to be listed today, the x-ray would definitely figure prominently among the top ten.

However, the x-ray might not really be entirely benign in its effects, says Bruce Kimler, an American radiobiologist in the department of radiation oncology at the Kansas city-based University of Kansas Medical Center. Kimler has challenged Roentgen's legacy. According to Kimler, x-rays and other sources of low-level radiation may be damaging the brains of foetuses in the womb.He says such radiation could be responsible for a significant proportion of the 2,000 out of every 100,000 children born with brain damage in the us every year.

Kimler believes that foetuses exposed to a radiation dose of one milligray between eight and fifteen weeks after conception, when the rate of brain growth is probably the fastest, could stand an increased chance of brain damage, leading to severe mental impairment (International Journal of Radiation Biology, Vol 73, p 423).

Most people are usually exposed to about two milligrays of background radiation every year from sources that include traces of uranium in the soil, emissions from nuclear plants and atmospheric bomb tests. Medical x -rays give varying doses, ranging from 0.05 milligrays for a single chest x-ray to one milligray for a series of pelvic x-rays. Even higher doses often involve barium enemas.

Pregnant women are advised not to go in for x-rays. However, many of then often do either because they do not know they are pregnant or simply because they suffer a broken a hip or perhaps a fractured pelvis. And this, says Kimler, is where the x-rays could push a foetus's radiation into the danger zone.

Kimler's statement finds proof in laboratory tests conducted on rats. He exposed rat embryos to different doses of radiation at various stages of their development and found that if exposed to doses around 500 milligrays 15 days after conception, which is when their brains growth is the fastest, rat foetuses develop thinner cortexes and smaller brains. This in turn affects their physical development and slows down their reflexes. Smaller doses, around 250 milligrays, reduce rats' ability to negotiate mazes. Kimler also reports cellular changes in the brain induced by as little as just 62.5 milligrays. He believes that even minuscule doses of radiation will have effects on the brain, though these might often be subtle enough to go unnoticed.

Kimler, upon reviewing all the evidence linking radiation exposure to brain development in humans and animals, argues that damage to our brains is likely to be similar to that observed in rats. For every 100,000 children exposed to a radiation dose of one milligray in the womb, Kimler believes as many as 50 could develop psychological and emotional defects as a result. These could include hyperactivity, aggression, low intelligence and lack of curiosity.

Kimler points out that among some 1,500 foetuses exposed to radiation in the Hiroshima and Nagasaki Holocaust in 1945, more grew up to suffer from brain damage than cancer. Studies suggest that 30 of these children were mentally retarded, compared with the 18 who suffered from cancer.And 19 of the mentally retarded children had been exposed to the radiation between eight and fifteen weeks after conception.

Kimler suggests that cells killed by radiation might remain in place in the developing brain and physically prevent healthy cells from migrating and organising as they would in normal babies. However, Gerhard Konermann, a radiobiologist at Freiburg University in southern Germany, argues that this "cell blocking" is unlikely to be the main mechanism. The killing of key cells may be critical, he says, as well as damage to the matrix between cells or proteins that help direct migrating cells.

Robert Corbett, chairperson of the radiation protection committee of the London-based British Institute of Radiology, agrees that pregnant women should not be given x-rays unless absolutely necessary. But he suspects that the majority of cases of mental retardation in children have other causes. "There is a potential risk to all developing tissues, but it is incredibly minimal," says Corbett.