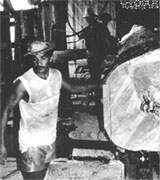 World Bank (wb) representatives recently asked the government of the state of Rondonia to check accusations of invasion of the indigenous area of the Uru-Eu-Wau-Wau tribe and the Guajara-Mirim state park where the wb is funding the agriculture/livestock and forest recovery plan of Rondonia, called Planafloro.

In November 1996, the wb had warned Rondonia's governor that the deadline for Planafloro's conclusion would be extended only if those areas were inspected and controlled. Pro-Indian groups fear that Planafloro may produce similar environmental disasters induced by an earlier wb programme.

Accusations by the Indianist Missionary Council (cimi), the Eco-Environmental Defense Association (kaninde) and the Board of Indigenous Nations and Peoples of Rondonia, North of Mato Grosso do Sul and South of Amazons (cunpir), recently revealed that the earlier inspection had shown about 400 families living in the Uru-Eu-Wau-Wau area, of which only 20 reportedly were permanent and the rest were engaged in felling trees to capture lands. cimi pointed out that the machines seized during this inspection were also returned to the invaders. kaninde is requesting an environmental audit of Planafloro, while cunpir has taken serious objection to woodcutters harassing Indians and politicians encouraging invaders.