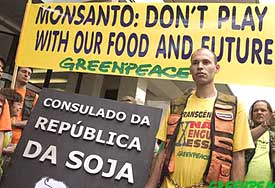 brazil, the world's largest food exporter with a ban on genetically modified (gm) crops, has decided to legalise these. The step is aimed at checking their expanding black market in the country. The move defeats years of efforts of environmental and consumer groups that have won several court cases against gm crops, defeating biotech seed companies, scientists and other groups.

"The ban hobbled Brazil agriculturally and undermined its advantages as a leading world producer and researcher," says Ivo Carraro, executive director of Brazil's farm research cooperative Codetec. Despite the ban, the gm technology was very popular among Brazilian farmers, who found it highly economical. Over a third of the country's soybean crop, its major agricultural export item, came from gm seeds. Brazil's other major agricultural produce, cotton, was also heavily contaminated by gm seeds.

A bill defining a regulatory framework for commercial use of gm crops was recently passed by the country's lower house. Brazil's Senate had already approved it. "I'm certain that the black market will shrink and our seed industry will recover," says Ywao Miyamoto, president of Brazil's seed producers association Abrasem. Even before the bill was passed, the government had issued orders allowing the sale of gm soy on the condition that the producers register their black market gm soy with the agriculture ministry.