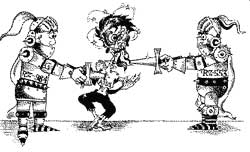 while battles rage between pharmaceutical companies and developing nations for cheaper access to existing drugs against aids, new research is also emerging. Two of the recent developments, one a vaccine that inhibits hiv, other, a therapy that attacks the deadly virus are worth the metion.

A vaccine that does not prevent aids but inhibits deterioration of the condition beyond a limit has been tested successfully on monkeys. Researchers at Merk and Co Inc., a private corporation, have produced the vaccine that is capable of curbing the damaging stages of aids says a report dated April2, 2001 in the Washington Post . During the clinical tests conducted by the company, three monkeys who had been given the vaccine were found normal more than eight months after being infected with a virulent strain of the aids virus. Over the same period, four of six monkeys not given the dose of vaccine died of their infections.

The researchers tried out five different vaccines, each containing a gene called 'gag' from the simian immunodeficiency virus (siv), the monkey version of the aids virus. Three vaccines used the gene in the form of naked dna -- from which the external protein coat had been removed -- either with or without specific boosting compounds, called 'adjuvants'. The other two vaccines were created by putting the siv gene in viruses that had been crippled so that they would be unable to replicate and grow. One was the 'vaccina' virus, the kind of virus used to produce smallpox vaccine. The other was an adenovirus, a large family of microbes that can cause colds and respiratory infections. The monkeys that had received the adenovirus were able to suppress the virus within two months and their antibody cells recovered to near normal numbers. In contrast, the unvaccinated monkeys rapidly developed aids.

In recent months, other research groups have also shown similar results. The Merk approach, however, is the only one that could stimulate the cell-mediated immunity.
And in India a non-toxic therapy against aids (acquired immune deficiency syndrome) maybe in the offing. Many research groups across the globe have being looking into the use of enzymes to prevent aids . Now, researchers at India's National Institute of Immunology (nii), based at Delhi, have artificially recreated two such enzymes and successfully tested them in the laboratory on cultured cells.

Two us -based research groups, following the same approach, have already begun clinical tests," says Nava Sarver, chief of the targeted interventions branch of the National Institute of Allergy and Infectious Diseases, based at Bethesda, usa.

The hiv produces an enzyme that helps it latch onto the numerous receptor sites on the host cells. Once in place, it creates havoc. T he host cell, when under attack, produces enzymes that upset the virus' attempt to latch on to the receptor sites. The nii team, following this natural process, have synthesised two enzymes, r z-553 and r z-984. They have carried out experiments with these enzymes using reovirus, a virus similar in some characteristics to the hiv , on cell cultures. The team successfully blocked the production of the reovirus' crucial enzyme by cutting the genetic material of the virus at a vital point. It thereby prevented the virus from attacking the host cells.

"Each molecule of the enzyme acted on a large number of virus bodies. This reduced the amount of the enzyme needed," says Akhil C Banerjea, head of the laboratory of virology, nii . The enzyme was effective only in the presence of Magnesium Chloride and at 37 c , which is close to the physiological level in human beings.

Banerjea says, "The enzymes, when introduced into aids patients are not likely to have adverse response." But Sarvar admits, "The study has been done on laboratory grown cells and it would be a quantum leap from these studies to predicting whether enzymes will work on hiv patients," says Sarver.