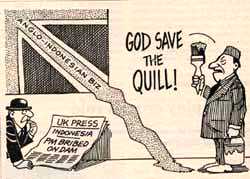 DOING business with Britain is not Malaysian prime minister Mahathir Mohamad's cup of tea any longer. Following allegations in the British press that Mohamad had accepted a bribe from a British contractor, the prime minister has imposed tough trade sanctions against that country. In a move geared to send Britain's private sector reeling, the Malaysian cabinet has approved a decision not to award any more government contracts to British companies, leaving them a worried lot: the decision jeopardises the future of pending agreements, valued at $ 5.5 billion.

Trouble was already brewing when the British press reports alleged that the $348 million aid given by the Overseas Development Administration to Malaysia in 1991 for the construction of the Pergau Dam was linked to a $1.4 billion arms deal (Down to Earth, February 28, 1994).


Matters came to a head when the Sunday Times published a report on February 20 that in 1985 the British construction firm, George Wimpey Co, had formulated a plan to grease palms through a middleman in order to push through a $922 million contract for an aluminium smelter. Although the article did not specify whether the $50,000 payoff actually changed hands, it stated that the plan was to channelise the funds to top level Malaysian officials, including Mahathir Mohamad.

For Mohamad, the cabinet decision is a moral victory of sorts. Asiaweek reports that he termed the decision a form of economic armtwisting, "which we learned from Western countries". In a below the belt hit at Britain, he asserted that if the West could threaten the withdrawal of trading privileges because of human rights violations, Malaysia could do likewise.

Such rhetoric may prove costly to the Malaysian private sector, which will have to find new partners to do business with. Ultimately, as both Britain and Malaysia are discovering, business and politics make for strange bedfellows.