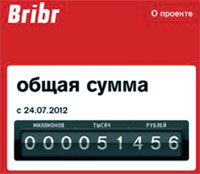 Have you ever wanted to see an interactive map of all the bribes that change hands in the country?

People in Russia may be able to, thanks to a new smartphone app released for free download by a group of entrepreneur activists. Bribr, designed by 20 Muscovites, allows users to register bribes they have had to pay on their mobile phones and then automatically pinpoints them on an interactive map online. The idea is the map will portray an entire constellation of payoffs passing hands across Russia’s nine time zones.

Yevgenia Kuida, 25, who founded Bribr, hopes it will contribute to a public movement against corruption. Since it went active in the first week of October, the app has logged 1.55 million rubles (almost $50,000) in bribes.

According to Bribr’s website, bribes for faking exams to get into university or for getting a child into kindergarten account for 70 per cent of reports thus far.