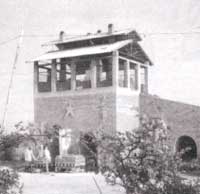 A FUEL-EFFICIENT and superior quality brick-making technology is now available in India. The first vertical shaft brick kiln (VSBK) was built in 1996 at Datia in Madhya Pradesh by a group of national and international NGOS (Development Alternatives, Vol 7, No 3).

The VSBK is a kiln for firing construction bricks whose technology was first developed in China in 1958. Since then, the VSBK technology has undergone many changes and now there are some 50,000 VSBKs operating in China. With assistance from the Swiss Development Cooperation, a project was undertaken in Datia in 1994, to assess the energy efficiency of the VSBK and to evaluate its environmental performance.

The construction of the first in India started on March 14, 1996 under the guidance of a Chinese team. During the test run of the kiln, it was found that the'quality of the bricks produced was better than those produced in ordinary kilns. The kiln saved up to 30 to 60 per cent of energy. The breakage of bricks is only about two to four per cent and much less than that observed in VSBKs in Nepal and Pakistan.

The kiln is made up of one or more shafts located inside a rectangular brick structure. The shaft is square or rectangular in shape - usually one metre in width and one to two metres in length. The inside surface is a brick wall usually lined with one layer of firebricks in the hot firing zone. Clay or rice husk mixed with clay is used for filling the gap between the shaft wall and the outer kiln wall.

The shaft is open at both ends. During continuous operation of the kiln, layers of dried bricks are loaded at the top of the shaft and arranged in a predetermined pattern with gaps between them. These gaps are then filled with powdered coal which is spread uniformly on each layer. The kiln has unloading tunnels running across its width in line with the shafts. The bricks are unloaded with the help of an unloading trolley which runs on rails along the length of the unloading tunnel and then sorted out and kept in the respective classified areas.

The unbaked bricks are carried up to the loading platform manually or by donkeys. The main operational skill lies in positioning the firing zone in the middle of the shaft .The draught of air moving up from the bottom of the shaft cools the fired bricks and itself gets heated. The central firing zone heats up to maximum temperatures of the order of 96'c to 99'c. The hot gases moving upwards dry and heat up the unbaked bricks which move down the shaft. The energy efficiency of VSBK depends on this intensive use of the heat generated. The firing temperature is controlled by the amount of coal which is spread in the space between unbaked bricks in each batch.