Budget 2008 no relief to agricultural recession 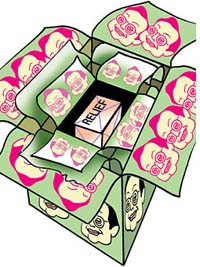 it was the biggest feature of the union budget, and was played to the maximum effect. Waiver of small and marginal farmers' loans amounting to Rs 60,000 crore triggered a virtual stampede among political parties to claim credit for it; the ruling United Progressive Alliance (upa) termed the decision 'momentous'. The budget, however, offers little to address the larger problem of agricultural recession, the main reason behind severe indebtedness of farmers (see graph Unsustainable).

Available official data shows that rainfed areas with the maximum concentration of small and marginal farmers will not benefit from the waiver. Add to it the fact that the budget does little else to raise agricultural productivity in rainfed areas, and it becomes clear the decision will not go a long way in reversing the recession.The Economic Survey that preceded the budget had made an urgent call "A second Green Revolution, particularly in the areas which are rainfed, may be necessary to improve the income of the persons dependent on the agriculture sector." It did not find an echo in the 2008-09 budget.

"Writing off loans may not have any real beneficial effect on the areas and cultivators that are the worst affected by agrarian distress," says Jayati Ghosh, an economist with Jawaharlal Nehru University in New Delhi who has extensively studied agrarian crisis in India. It seems the government has done creative accounting to minimize the scope of waiver but to extract the maximum political mileage. "Seventy per cent of farmers who own less than one hectare do not opt for commercial credit. So the waiver bypasses them," says Mohan Guruswamy, chairperson of the Delhi-based Centre for Policy Alternative.


Finance Minister P Chidambaram waived all 'overdue' loans due till December 31, 2007, of farmers with landholdings of up to two hectares (ha). For other farmers, the government has offered a one-time settlement a rebate of 25 per cent if a farmer pays 75 per cent of the loan overdue. The waiver does not cover loans farmers are regularly paying--20 per cent farmer households are paying loans regularly. Government commercial banks account for Rs 12,000 crore of the total overdue formal agricultural loan to be waived, while cooperative and regional rural banks account for the rest. Those who borrowed from moneylenders and other informal sources will not get any relief.

The government claims the proposal will benefit 40 million farmers. But these may not be the neediest ones, for the majority of the small and marginal farmers do not access credit from the formal sector. "The waiver will give some relief to roughly 35 per cent of small and marginal farmers and nearly 50 per cent of large farmers, mostly confined in favourable environment. Rainfed areas' farmers are deprived of the formal credit," adds P K Joshi, director, National Centre for Agricultural Economics and Policy Research, Delhi.


Of late, farmers with more than two hectares of land are increasingly availing agricultural credit. The outstanding loan amount too has grown faster in case of farmers having more than 2.5 ha as compared to marginal (holding less than 1 ha) and small (less than 2 ha) farmers. On the other hand, the share of marginal farmers in formal credit distribution has come down from 28 per cent in 1981-82 to 25 per cent in 2003-04. The share of small farmers has been stagnating at around 25 per cent since 1981-82. The share of large farmers (with landholding above 2 ha) has remained at around 51 per cent since 1981-82. This is significant given that marginal farmers now operate more landholding than a decade ago. In case of large farmers, though the land size remains same, their credit access has gone up.

The current proposal will cover less than 50 per cent of the total debt of farmers in India. In 2003, the government estimated the total debt of farmers at Rs 1.13 lakh crore. Farmers owed Rs 65,000 crore to formal institutions and Rs 48,000 crore to non-institutional agencies. The debt has gone up since than. The share of moneylenders in farmers' outstanding debt is the highest -- 53 per cent--in Andhra Pradesh, followed by Tamil Nadu (40 per cent), Rajasthan (37 per cent) and Punjab (36 per cent).

In case of farmers with landholding of less than 0.4 ha, the share of non-institutional credit is even higher; more than 80 per cent in Andhra Pradesh and Rajasthan. "Most of the distressed farmers of the Vidharbha region of Maharashtra, Rayalseema in Andhra Pradesh and south Karnataka will not get the debt relief," says Ghosh.


The relief will not cover maximum indebted farmers, for the incidence of indebtedness and the share of institutional finance in outstanding debt are proportionate to increasing landholding size (see table Out of relief net). While 46 per cent of small and marginal farmers are indebted, in case of large farmers the figure is 66 per cent. In terms of share of institutional credit in the total debt, the figures are 51 per cent and 68 per cent respectively.

This is the last budget of upa that came to power in 2004 amid a precipitating agrarian crisis and a deluge of farmer suicides. In its last year, the situation is no different. Rather it is worse in many ways. According to the Economic Survey, the growth rate of food grain production is 1.2 per cent, lower than the annual population growth rate of 1.9 per cent. Creation of additional irrigation potential has come down from 3 per cent annually in the 1990s to 1.8 per cent in 2007. Agricultural growth is expected to be around 2.6 per cent against 3.8 per cent last year.


Demand for consumption is, however, growing fast. This is the reason inflation is high. After years of moratorium on import of food grains, the government had to import wheat in 2006 to bring down domestic prices. But that option may not work in the future, for the global food price is also increasing.

The Economic Survey prescribed an enhanced focus on rainfed areas to raise agricultural productivity because irrigated areas have exhausted their potential. But the budget hardly bears out the government's intention of long-term revival of agriculture. "The total central plan spending on agriculture and allied activities as proportion of gdp has dropped from 1.42 per cent in 2007- 08 to 1.30 per cent in 2008-09, and the total irrigation spending has remained unchanged at 0.01 per cent," says Ghosh. The budget should have made capital investments in minor irrigation and emphasised decentralization, adds Guruswamy. It seems the budget has tried to treat a few symptoms rather than the disease itself.