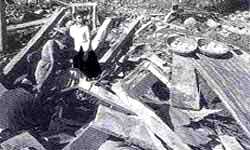 Vilasrao B Salunke, father of the pani panchayat concept in the drought-prone Marathwada region in Maharashtra, has evolved quake-resistant houses in areas affected by the September 30 earthquake. Salunke, convenor of the Pune-based Earthquake Disaster Management Group, advocates ferrocement technology to build new houses on existing foundations of the recently destroyed ones.

This cost-effective technology, Salunke claims, can withstand quakes of magnitudes upto eight on the Richter scale. Salunke -- who has submitted his proposal to Maharashtra chief minister Sharad Pawar -- says his scheme would reduce rehabilitation costs to less than Rs 100 crore, one-fifth of government estimated costs.

Ferrocement technology can be used to build an integrated structure flexible enough to bend or warp without breaking. Says Salunke, "A house of about 23.2 sq m plinth area can be constructed in 60 man days. Four people can build it in a fortnight. Moreover, the cost per house at Rs 30,000 is one-third of government estimates."