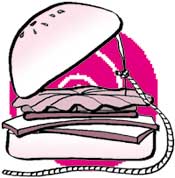 Food firms have been warned by the European Union (eu) to stop advertising junk food to children and to make labelling on products clearer. Markos Kyprianou, eu health and consumer affairs commissioner, issued this warning in the last week of January. He said that unless voluntary steps were taken by food companies, the eu would introduce rigid legislation to do the job. He declared that significant commitments from the food industry were essential in the fight against the rising obesity of Europe's burger-munching youth. Kyprianou called upon food producers to use clear labels that describe contents of junk food products.

He lamented that "Obesity is no longer a problem for only the Americans. It is also a problem for Europeans". Experts estimate that almost 25 per cent children in eu countries are clinically-obese. According to the latest figures, released by the International Obesity Task Force, 36 per cent of nine-year-olds in Italy are overweight or obese. In Spain, 27 per cent of children and adolescents are affected by the malady. "It's a dreadful situation and the epidemic appears to be accelerating out of our control," rued Philip James, chairperson of the task force.