Burglar in the brain 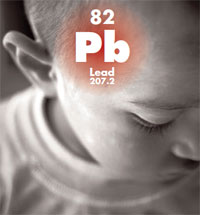 LEAD poisoning is one of the oldest occupational and environmental hazards.

Present in everything from house paints to toys, even a small amount of lead can interfere with children’s developing brain and nervous system and affect their learning and cognitive ability. But the precise mechanism by which lead affects brain development in children was not understood.

“We have been studying the mechanism for over 18 years,” said Tomas R Guilarte, chair of Environmental Health Sciences at Columbia University in USA. Until recently Guilarte was at Johns Hopkins School of Hygiene and Public Health, where in 1992 he discovered a critical property of lead: it blocks the normal function of a receptor in the brain, NMDA (N-methyl D-aspartate) receptor, which allows nerve cells or neurons to communicate with each other and thus plays a key role in learning and memory.

Guilarte’s student at Johns Hopkins, April Neal, recently took his finding forward and explained the mechanism by which lead impairs neural communication. Every event we remember is stored in discrete packets in different nerve cells of the brain depending on its complexity. These cells should communicate for us to recall the event.

Communication between the cells is guarded by locked doors—NMDA receptor— so that at any point of time we are consciously thinking about only a few things. When we try to remember something, a chain reaction is initiated which requires opening of the pertinent locked doors to access relevant information. But if for any reason the lock is jammed, the information is no longer accessible.

This happens when lead binds to NMDA receptor and blocks its activity. Realising that its guards have been compromised, the cell responds in a way it would to an intruder and hides the information. As cells are connected in networks, this response to an intruder is transmitted to other cells and results in memory loss or impaired cognition. While this is easy to conceptualise, proving it scientifically took Guilarte and his colleagues several years because nature has made nerve cells way more complex than storerooms.

Neal looked at the differences in inter-cellular communication in cultured neurons before and after their exposure to lead. Nerve cells interact with each other using synapses, which are physical contacts between their arms. Communication between them is carried out by messengers, called neurotransmitters. The nerve cell that initiates the relay of information by sending messengers is called the presynaptic cell and the one reacting is called the postsynaptic cell.

Initially, Neal looked at changes in the postsynaptic cells. But there were minor changes. She suddenly saw a blatant difference in presynaptic cells: the levels of proteins that keep neurotransmitters ready for release had reduced significantly.

“We looked at the postsynaptic cells and found BDNF levels had reduced in them. When we added some BDNF protein to the cell, the presynaptic defects disappeared,” she added. Does this mean there is a plausible therapy for lead poisoning in children? No. “It is technically difficult to administer proteins like BDNF to people,” Neal added.

Previous studies conducted in Guilarte’s lab on rats exposed to lead showed when they were exposed to an enriched environment, like bigger cage with various kinds of toys, running wheels and tunnels, they performed optimally in cognitive tests like finding a hidden platform submerged in water. The studies had indicated that probably an enriched environment could reverse the neurological effects of lead. Neal doubts.

“It is much harder to define what an enriched environment should constitute for children as they need to learn many complex things,” said Neal, who has since received her PhD and moved on a post doctoral position in Michigan State University.

Guilarte, in the meanwhile, is focusing on deciphering in greater detail the exact events that are affected by lead poisoning in the presynaptic cells.