The Buriganga river in Bangladesh was once admired by the Mughals for its strategic location for defence. The city of Dhaka was developed along its banks as a prime trade centre. The river was also the main source of drinking water for the city.

But now the river has been reduced to drain. Most of the riverbed is lost to encroachment and the remaining suffers from municipal and factory waste dumped through storm drains. The Sadarghat Launch Terminal, one of the largest river ports in the world, also contributes to the pollution. At present, about 30,000 people use the port; its operation results in discharge of burnt oil and affluents everyday.

“It is a dead river. Till the silt and plastic dumped in it are removed, no fish can survive in it,” says M A Matin, general-secretary of Bangladesh Paribesh Andolan (BAPA), a civil society organisation that has been involved in sensitising local governing bodies and people on protecting the environment.

Buriganga is an example of the general state of many rivers of Bangladesh. More than 140 million people depend on the rivers for their livelihood and for transportation. To clean them seems an uphill task, especially in the absence of any pro-rivers policy of the government.

“It's the rivers, due to their active deltas, that created Bangladesh. The country inherited 800 to 900 rivers in 1947, but by 2012 only 230 have been left with us. Another 25 are dying rapidly. River degradation has been alarming as life was supported and lived by the riverside”, says Matin. The main reasons for this has been not just loss of flow and speed due to small dams built by engineers for irrigation, but more importantly the way we mistreat the river,” he adds. 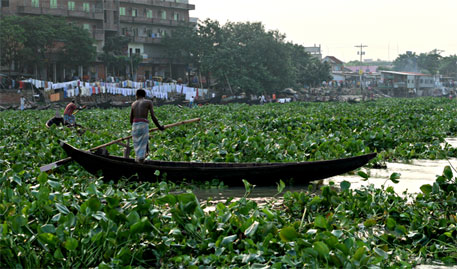 A ride from the eastern ghat of Bashila to the busy inland river port of Sadarghat (see map) shows the extent of degradation of the river. “Only wastewater flows here now. No fish can survive in it anytime of the year. It is difficult to row as well because water hyacinth is everywhere and obstructs our boats. The government does nothing to remove it and it is impossible for us to remove it manually as it grows fast,” says boatman Zaharul Alam.

Studies show what is causing the pollution. A 2007 study by the World Bank and Institute of Water Modeling, Bangladesh, states that almost 1.5 million cubic metres of waste is dumped into the rivers of Dhaka everyday by the 7,000 industrial units that surround the city (see 'Pollution indicators'). Another 0.5 million cubic metre of waste is discharged from other sources, such as domestic waste. Encroachment by private companies, which has narrowed the riverbanks, poses another alarming threat. Land encroachers have created illegal structures, including houses, bazaars, ghats and brick kilns in the riverbed, that has hampered the flow of the river. Besides, sand mining and lack of silt-management also threaten the river’s survival.

“The authorities are well aware of what is going on. Apart from the industries, Dhaka City Corporation and Water Supply and Sewerage Authority (WASA) also dump their waste here," says Sharif Jamil, an environmentalist based in Dhaka.

According to the study, there are about 300 types of effluents that are discharged into the river from nine major industrial clusters—Tongi, Hazaribagh, Tajgonj, Tarabo, Narayangonj, Savar, Ashulia, Gaziour and Ghorashal. The river carries about 61 per cent industrial and 39 per cent domestic waste. The tanneries are known as the biggest polluters of all. There is no data on the exact number of units. However, an estimated 500 tanneries, including 200 large units in Hazaribagh, discharge 4.75 million litres of highly toxic waste into the river. Besides, 95 tonnes of solid and hazardous waste, including trimmings of finished leather, shaving dust, hair, and trimmings from raw hide are also dumped in the area's open drains.

The only sewage treatment plant for Dhaka at Pagla in Narayangonj, managed by WASA, can treat only 10 per cent of the city's wastewater. Orders by the government to vacate or relocate are defied by using political links or bribing.

Most industries do not have any treatment facility at all while others that do, do not operate them regularly. The wastewater from these industries flows out through khals (natural canals) into the river. At some places, concealed pipes have been put  underground for effluent disposal. 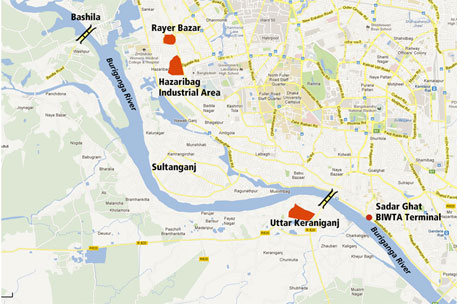 In addition, residents and vessel operators also dump solid waste into the Buriganga-Turag river system. During dredging, huge quantities of polythene have been found under water. The countless vessels and mechanised trawlers that traverse the river also discharge solid waste and burnt oil into the waters.

In the past, people used to move to the banks of the Buriganga as it provided livelihood to people. But pollution and loss of navigability has forced thousands, including fisher people, to take to street vending and other trades.

Water-borne diseases are also common. “My skin has become swollen and red and there are rashes all over my body,” says Lotif Alam, a boatman near Keraniganj locality across the Buriganga, close to bridge 2. 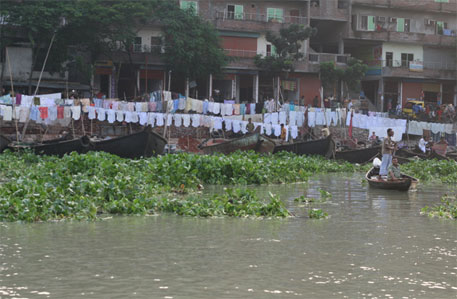 Close to the Sultanganj near Hazaribagh industrial area, washer people struggle to wash clothes in the dirty river water. One of them, Karim Ahmad, says, “There is no choice for us. Look at the polluters who throw such filthy water into the river. We make a small living and people question us and not them (industry owners).” Near Rayer Bazar area, the foul smell produced by the tanneries is unbearable. Rahat Anis, who lives close to Rayer Bazar area says, "The water is red and foul-smelling. It is very difficult to even walk past here.”

A survey by Society for Environment and Human Development, an advocacy group in Bangladesh, has shown that skin and gastrointestinal ailments, hypertension and jaundice among people living near the river are caused by environmental degradation of the Buriganga. The presence of heavy toxic metals such as chromium can even lead to cancer.

The government has constituted a number of task forces in order to suggest measures to tackle river pollution. As a result, since 2008 several recommendations have been made on curative and preventive measures. The suggestions ranged from formation of a river cleaning authority that would check activities by respective authorities that were polluting the river and encroaching on the riverbed to building sewage treatment plants at various locations and to develop a complete sewerage system and re-locate polluting industries.

The Bangladesh Inland Water Transport Authority (BITWA) undertook the task of removing 300,000 cubic metre of sludge and solid waste from the riverbed in 2010. The extracted sludge was to be disposed of at Dhaka City Corporation's dumping site. However, the civic agency refused to accept the waste because of its volume and the unknown characteristics of the waste.

“Most of these efforts have not proved to be sustainable. There has been no integrated and coordinated initiative. Besides, there is lack of manpower, experience, funds and timely action. It shows poor governance,” says Syed Azizul Haq, retired superintending engineer of the public works department of Dhaka.

Civil society groups have been fighting a prolonged battle to bring the river back to life. They have suggested a number of steps.

BAPA has been holding conferences on transboundary rivers in Dhaka. After thorough fact-finding, BAPA has made some elaborate suggestions. It has published a resolution on rivers and Dhaka Declaration on Bangladesh Environment in 2004 and 2010. These are made available to citizens and government agencies.

Sharif Jamil, another activist based in Dhaka, says the community needs to be involved right from the first stage of observations, data-collection and holding public meetings on the riverbank. The Buriganga River Keeper campaign has a simple but effective plan to pressurise the government and industry owners to treat the water at effluent treatment plants (ETPs) first and then release it in the river. These include collecting data and presenting them at public meetings to build up a campaign. “In addition, the domestic sewage system also needs to be tackled.  WASA has to be pressurised to install more sewage treatment plants so that only treated water is  released into the river,” says Jamil.

Experts feel that with a focus on integrated approach, various government departments must come together to save the river. The DCC, BIWTA, ministry of environment and the ministry of industries must work together to perform different functions to bring Buriganga back to life, they say. Construction of ETPs, relocating industries away from the city and imposing strict laws against any violation would be vital and essential to take this forward.

There is a need to make this successful and sustainable by involving the community in managing the pollution. “Giving the community a responsible role in monitoring and recording failures and improvements could provide necessary focus and impetus required to solve the pollution problem. It is not the policies alone but the participation of various stakeholders that would bring the river back to life,” says Jamil.

“There is a need for many organised initiatives. I have seen people rinse clothes full of dye in the river at the same spot where excavators were removing rubbish. Involvement of NGOs or groups will not change things. It will all be in vain if the inhabitants are not sensitised so that some kind of collective action can be taken to pressurise government for stricter laws,” says Monirul Alam, resident of a locality along the Buriganga.