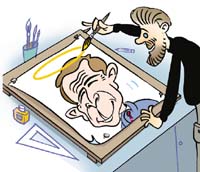 A us official denied a British newspaper report that President George W Bush was preparing to announce a dramatic policy shift on global warming in his State of the Union speech.

The Observer had quoted senior British officials, who were not named, to this effect. Bush and British prime minister Tony Blair held private talks on climate change before Christmas. The newspaper reported that there was a sense that the American president would agree on a cap on emissions that would mean energy conservation and pollution curbs by industry and consumers in the us

"President Bush is beginning to talk about more radical measures," The Observer quoted a source close to the prime minister as saying.

British officials have been pressing for the international community to hammer out a new global agreement for climate change to replace the Kyoto Protocol which expires in 2012.

But a senior us administration official said, "While the administration does not detail the president's speech before it is given, this rumour is certainly not true."

The White House and Downing Street declined official comment on the newspaper story.