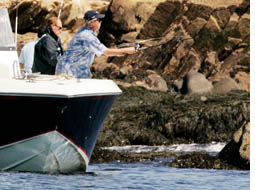 on august 3, 2007, India and the us declared a bilateral agreement on full civil nuclear energy cooperation after two years of tortuous negotiation. Nuclear energy propagators cheered, sensing a revival for the ailing sector. What went unnoticed in the international media was an agreement between the us and Russia to boost the global nuclear energy trade and then to control the boom.

Barely a fortnight before the Indo-us deal, the us and Russia, the world's biggest nuclear energy powers, drafted an agreement on cooperation and control of nuclear energy. They are now signing agreements with other potential nuclear power user countries. The us is negotiating a similar deal with Australia, the world's biggest exporter of unprocessed uranium.Russia has agreed to join the us- sponsored Global Nuclear Energy Partnership (gnep) and is negotiating support for nuclear energy projects with a dozen countries.
The global nuclear energy market is estimated to be worth us $375 billion in the coming decade. There are 442 nuclear power plants in the world, spread across 30 countries; most of them in western Europe and North America. Asia, particularly India and China, has seen a speedy growth in nuclear energy. Twenty-two of the last 31 new nuclear power plants are in Asia.

"The Russia-usa cooperation targets the anticipated business in nuclear energy production not just in countries like India and China, but in a wide range of other potential countries," says Robert Joseph, us special envoy for nuclear non-proliferation. The deal aims to concentrate the entire cycle of nuclear energy--supplying nuclear power reactors, ensuring access to nuclear fuel and fuel services for the lifetime of reactors, funding packages to interested buyers--between the us and Russia.
The Russia-usa deal also allows Russia to reprocess spent fuels from nuclear reactors in the us. Fear of proliferations have been major impediments to reprocessing. us law does not permit this 'dirty' job. Now Russia has volunteered for this, since its law allows import, temporary storage and reprocessing of spent nuclear fuel from foreign countries. It also gives Russia a chance to control the distribution, reprocessing and storage of nuclear fuel around the world. "Russia is confident that there would be less domestic outcry over reprocessing others' spent fuel. Given Russia's rising control in the power sector, the us does not have much option than to involve it," says Ajey Lele, fellow with Delhi-based Institute of Defence Studies and Analysis. George Perkovich, vice-president of the ngo, Carnegie Endowment for International Peace, points to another factor "Big money is involved in this area." For Russia, it's a commercial opportunity worth us $25-35 billion.

The deal is expected to revive the us nuclear industry. In the 1990s, the us dismantled much of its advanced reactor research facilities and has since been depending on foreign-supplied ones, notes a December 2006 report of the American Council on Global Nuclear Competitiveness. The country depends on Russia for about 50 per cent of its uranium fuel requirement."One important benefit of the agreement is access to Russian developments in advanced reactor technologies," notes the council's report. With the world's nuclear energy sector abuzz with activities, "there will be a lot of strategic permutation and combination now," says Brahma Chellaney of the Centre for Policy Research, Delhi.

With Asia emerging as the largest nuclear market, the Indo-us nuclear deal is the first milestone of this changing equation. The Indo-us deal says India will be able to reprocess spent fuel from us-supported reactors under international safeguards, but the Russia- usa deal has already ensured that most of the reprocessing work is outsourced to Russia. Chellaney summed up matters quite aptly, "Players like the us and Russia will definitely do whatever it takes to control the business. The future will unfold within the next few years."