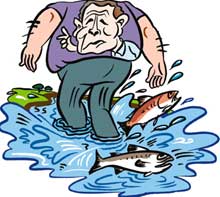 Prominent us scientists have come out against "the unprecedented efforts of the country's administration to gag research findings it doesn't like". "The Bush administration is putting science in the country at risk," the scientists told the Latin American webmagazine, Tierramerica.

"Major scientific studies [and] local field reports are being called into question when they contradict federal policy or corporate-business interests," says Jeff Ruch, chief of Public Employees for Environmental Responsibility, an alliance of government scientists and natural resource professionals. He was supported by Mike Kelly, who in 2002 was pressured to authorise increased pumping of irrigation water from Klamath river in the state of Washington to benefit Bush supporters, including big contributors from agribusiness. Kelly, then with the us National Marine Fisheries Service, showed that lowering the Klamath's levels would harm the endangered coho salmon (Oncorhynchus kisutch) -- protected under law. "They wanted me to do something illegal. I resigned," Kelly told Tierramerica. Political appointees replaced Kelly's analysis in 2002, and water was diverted. Next year more than 30,000 coho salmon and hundreds of thousands of their young died due to low water levels, he added.

Kelly also cited James Hansen, the leading scientist on global warming at nasa, who revealed in January that he had been censored. Hansen, now with the Government Accountability Project, a group protecting the public interest by promoting government and corporate transparency, added, "I have never seen anything approaching the degree to which information flow from scientists to the public has been controlled as it is now".