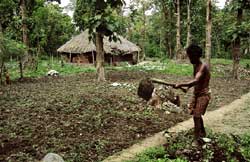 the cabinet gave its nod to the amendments in the Forest Dwellers (Recognition of Forest Rights) Bill 2005 on December 7, 2006. It has decided to go along with the recommendations of the joint parliamentary committee (jpc) on some important clauses of the bill. It includes the cut-off date for consideration for land rights as December 2005 for all tribal people. Earlier, the advocates of the bill had suggested that the cut-off date should be 1980, the year the Forest Conservation Act was enacted.

The cabinet has also accepted jpc's recommendation that the bill will recognise non-tribal traditional forest-dwellers provided they prove they have lived there for three generations. It rejected the recommendation of group of ministers (which had been set up to review the jpc recommendations) to have separate laws for forest dwellers and forest tribal dwellers.Going by the jpc recommendations and the Campaign for Survival and Dignity's demands (the set of several hundred grassroots organisations leading the argument on the bill), panchayati raj bodies have been given a greater role in settling the rights. The Union ministry of environment and forests had argued against such a provision.

The bill will be presented in parliament, with the committee of ministers for tribal affairs, panchayati raj, environment and forests and law and justice finalising it before it's introduced. "We support such a decision. But we will react only when we get a copy of the final bill," Shankar Gopalakrishnan, general secretary, Campaign for Dignity and Survival, said.