As per the Supreme Court’s classification of forests, Adani destroyed 2,000 hectares of mangroves in Kutch to build its ports, says the new CAG report tabled in Gujarat Assembly

Gujarat government wrongly classified mangrove forests as degraded forests in order to divert land to Adani Group-promoted Mundra Port and Special Economic Zone (MPSEZ), says a new Comptroller and Auditor General (CAG) of India report. According to the report, the wrong classification resulted in a profit of Rs 58.64 crore for Adani Group. The report reflects the findings of the government committee appointed in 2013, which showed that swathes of mangrove forests were illegally destroyed to build a port for MPSEZ.

The CAG report, tabled in Gujarat Assembly on Tuesday, said that wrong classification of forest land in Kutch by Gujarat government led to undue financial benefit in 2008-09. CAG had reported the matter to the government in May 2014. The Chief Conservator of Forest in his reply in March 2015 said that the area diverted to Adani Group was exclusive of mangroves. CAG was, however, not satisfied with the answer because those forests lie in the region of high tide and are flooded with sea water.

Timeline of events according to the report

May 2004: Two pieces of forest land, measuring 1,840 hectares (ha) and 168.42 ha, in Mundra and Dhrub villages of Kutch district were granted in-principle approval for diversion to Adani Chemicals Limited (ACL), a subsidiary of Adani Group, for setting up a solar salt project and salt washery in. 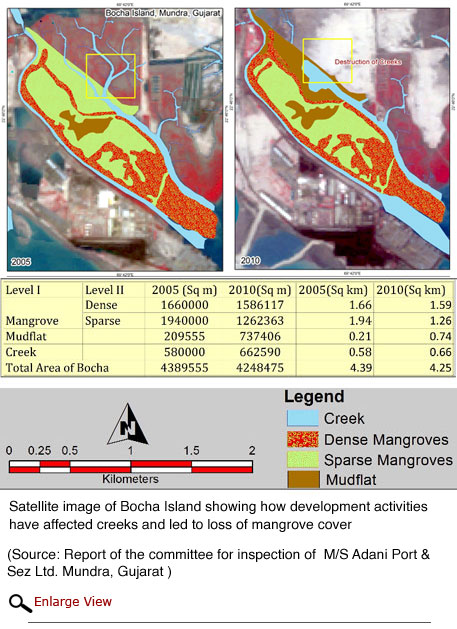 March 2008: The proposal for diversion was still pending with the ministry. Meanwhile, the Supreme Court in its judgment classified forests of India into six ecological categories and accordingly fixed rates of the net present value (NPV) to be recovered from any user agency for diversion of forest land for non-forest purposes.

Following Supreme Court’s directions, Gujarat government also notified NPV rates based on the ecological classes and density of forests of Gujarat. Kutch forests fall under two categories—“littoral (coastal) and swamp (flooded) forests” and “tropical and thorny forests”. The NPV rate for littoral and swamp forests was Rs 7.30 lakh per ha and while Rs 4.38 lakh per ha for the rest.

January 2009: The Gujarat Government submitted a fresh diversion proposal to the environment ministry for the previously earmarked forest land belonging to Dhrub and Mundra villages.

July 2009: Deputy Conservator of Forests recovered NPV of Rs 87.97 core from the Adani Group at Rs 4.38 lakh per ha for total 2,008.42 ha of forest land. But CAG found that Gujarat forest department, in its own survey, had classified the forest as a mangrove in December 2008.

MPSEZ has been in the eye of the storm ever since it was conceived in 1999. After receiving several complaints from residents of villages where the SEZ was planned, Union Ministry of Environment and Forests under the UPA government appointed environmentalist Sunita Narain as head of a committee. The committee also comprised of government forest officials from both the Centre and the state. The committee found incontrovertible evidence against Adani Group for violating environmental norms. It found that in order to develop its ports, Adani Group blocked most of the creeks in the area with construction activity.