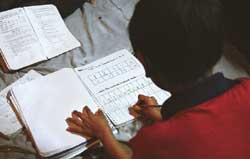 scientists at the University College London (ucl) say they have discovered the area of the brain linked to dyscalculia -- a learning disability. The people affected struggle with mathematics. The scientists claim the finding will prove crucial in diagnosing the disability.

Led by Brian Butterworth, the researchers looked at an area of the brain involved in processing numbers. They found the region, in fact, has two functions one is responsible for counting 'how many' things are present and the other for knowing 'how much'. It is the discovery of the part responsible for counting that is a major finding for Butterworth, who also published The Mathematical Brain and is an authority on dyscalculia. The study was published online on March 6 in the Proceedings of the National Academy of Sciences (pnas).

The scientists conducted two experiments that looked at brain activity in the intraparietal sulcus -- the area known to be involved in processing numerical information. They scanned brain activity using functional magnetic resonance imaging, commonly called f mri. The first experiment analysed brain activity when subjects were counting and the second, when they were assessing quantities.

Butterworth said that the subjects were shown blue and green squares in a sequence or together on a screen. Both the methods activated the same brain region. But when the subjects were shown the colours merged (for instance, appearing as a continuously changing square), different results were produced and a different brain network lit up. This is because the brain now had to assess how much colour was in the block and guess whether there was more of one colour or the other.

By comparing the two types of stimuli, the scientists were able to identify the brain activity specific to estimating numbers of things. "We think this is a brain network that underlies arithmetic and may be abnormal in dyscalculics," adds Butterworth.