Call for moratorium on biofuel 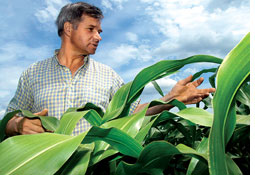 The un Special Rapporteur on the right to food recently has called for a five-year moratorium on biofuels, calling it a "crime against humanity" to convert food crops to fuel.

Cereal prices have already soared in African countries putting pressure on them to import food, Jean Ziegler said. Designated a rapporteur, Ziegler is an independent expert who reports to the un Commission on human rights.

A moratorium on biofuels will allow scientists to develop ways to make such fuel from crops, without diverting land from food production, he said, citing projects in India where biofuel crops are being planted in arid areas.

Meanwhile, the European Commission announced a reduction in the subsidy to farmers growing biofuel crops this year. "Plantings have increased more than expected," it reasoned. The subsidy, energy crop premium, was introduced in 2004 following the introduction of a new farm policy in the eua year before. The policy included a flat-rate subsidy of 45 (us $63.83) per hectare (ha) for up to 2 million ha of European farmland. But this year, farmers have asked that this bar be raised to 2.8 million ha. To meet this demand, the commission says it will have to spend its entire biofuel subsidy budget of 90 million ( us $128 million).

When the scheme started, only 310,000 ha were planted with biofuels. "The total applications this year are over the limit of 2 million ha. So farmers will get payments for 70 per cent of the land they applied for," said the commission in a statement.

In yet another development, the Ugandan government has dropped plans that would have allowed a private company to grow sugarcane for biofuel production on its protected Mabira forest reserve. The controversial proposal, which would have turned over 7,000 ha of Mabira to the Mehta Group, had caused alarm in environmental circles and stirred racial tensions. The decision has reportedly been made quietly by Uganda's finance minister Ezra Suruma during a trip abroad in early October. Suruma said that the government was committed to "conserving Mabira " and that "other land would be found for sugarcane". This is the second time this year that it has reversed plans to allow biofuel production on protected land.